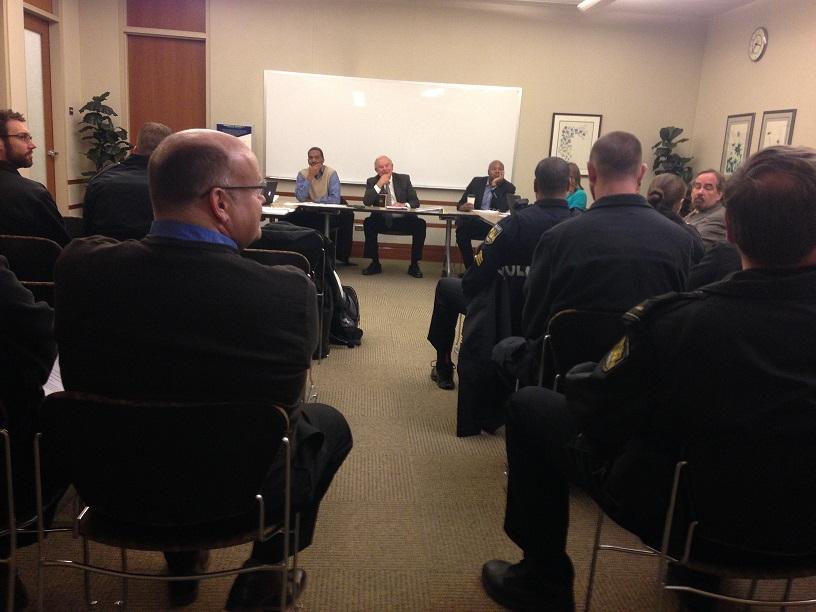 In front of an unusually crowded audience on Tuesday, the Marquette Police Department Advisory Board discussed MUPD policy and procedure revisions, including procedures for handling the department’s newly-implemented tasers.

Around 15 members of MUPD command staff, mainly including department captains, sergeants and lieutenants, attended the first 20 minutes of the meeting. Their presence nearly tripled the attendance of the previous board meetings. This meeting was the group’s last for this academic year.

Each command staff member briefly introduced themselves to the board and exited a short time later to get back to work or, as MUPD Chief Paul Mascari called it, “back to bed.”

MUPD’s tasers were implemented around a month ago and haven’t needed to be used since.

The board discussed how often a taser cycle, a five-second electric jolt that causes muscle contractions, can be used on a suspect. It ultimately recommended that no more than three cycles be used, barring an extreme or emergency situation.

The board discussed the revisions for 20 minutes and decided to implement them.

The board mentioned possible public trepidation about taser use, but it ultimately sees tasers as a sound alternative to guns.

“When you talk about tasering, people have a negative reaction to it until you realize it is a substitute for use of deadly force,” said Staff Senate Representative Carol Trecek.

The board also discussed MUPD’s vehicle pursuit policies. Due to the dangerous and sometimes deadly nature of vehicle pursuits, the policies only allow vehicle pursuit if a violent felony was committed or if there is a clear and immediate safety threat.

“Unless this is some really serious matter, this is in essence a no-chase policy,” said MUPD Advisory Board Chairman Thomas Hammer.

The next planned board meeting will be during the fall 2016 semester and the exact date is not yet scheduled.