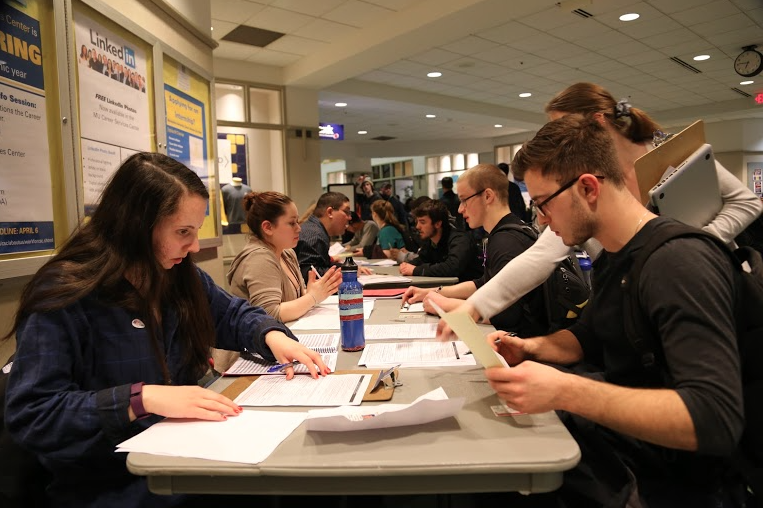 Yesterday Marquette students went to the polls to cast their ballots for the Wisconsin primary. On any given school day, the Alumni Memorial Union is full of students, but yesterday’s action had less to do with hustle and more with waiting patiently in line for up to two hours. This is pretty true of polling places in any city or state, but the difference is that many Marquette students were waiting in line to register to vote since they weren’t already registered in Wisconsin. This only added strain to the recently implemented, Wisconsin-specific obstacle: the voter ID law, which adds an unnecessary step to Wisconsin’s voting process.

The voter ID law was enacted to ensure that a registered voter is who he or she claims to be and not casting a ballot in someone else’s name. Over the years, these types of laws have been either passed or enhanced in 36 states, including Wisconsin. It might seem like the ID requirements would be the same in every state, but each state varies in terms of which identification can be shown.

In fact, Wisconsin – alongside Indiana, Georgia, Tennessee, Kansas, Mississippi, North Dakota, Virginia and Texas – has one of the toughest versions of the law that does not allow voters to cast their ballot without showing a valid photo ID. Wisconsin voters can show one of the following five forms of identification if they wish to receive a ballot: a Wisconsin DOT-issued driver’s license, a Wisconsin DOT-issued identification card, a driver’s license without a photo issued under the religious exemption, a Military ID card issued by a U.S. uniformed service or a valid U.S. passport book. In other more lenient states, simply bringing a bank statement or utility bill is enough.

In many ways, the law discourages people from voting. The line of students waiting to register before waiting to vote weaving across the first floor of the union persisted throughout the day. Some students could afford to wait because they had open schedules or classes later in the day. In fact, students could stop by throughout the week in advance and the process was as one student’s Facebook post describes, “only five minutes.” But considering the turnout of same-day registration, it seems as though many students didn’t pay attention to the news brief the university sent out about obtaining a Marquette-issued voter ID card.

Marquette wasn’t the only university with long lines, and some students didn’t have the luxury of having time to wait. At the University of Wisconsin-Madison, the lines were so long that, “some students were giving up and leaving,” said Andrea Kaminiski with the League of Women Voters.

Beyond Marquette and other Wisconsin college students, marginalized groups are also discouraged by the voter ID law. Despite everyone deserving the equal right to vote, the voter ID laws can unfairly affect elderly, minority and low-income groups. Acquiring a voter ID is a nuisance. It requires taking time out of one’s day to get it, which is something that elderly and low-income citizens cannot always do. In 2012, a study done by the Brennan Center for Justice found that in Wisconsin, Alabama and Mississippi, less than half of all ID-issuing offices in the state are open five days a week. This puts an even greater limit on obtaining the ID.

It is also costly. Compared to other parts of the state, Marquette students were fortunate to have an on-campus location to get their ID for free. Other universities do not have this service, and other regular Wisconsin citizens have to buy one from an ID-issuing office.

The voter ID law makes the constitutional right to vote more difficult, and voter turnout is already low in the U.S. In 2015, the Pew Research Center ranked the U.S. 31st out of 34 developed countries for voter turnout.

Considering the Wisconsin presidential primary voter turnout yesterday was at its highest since 1972, it may be that citizens aren’t so discouraged by the ID law that they will not vote. Marquette students proved that when they took time out of their day to wait. With that said, the Wisconsin voter ID law can afford to be more lenient for the sake of time and cost for others.

While fraud is an understandable fear, it should be simple enough for Wisconsin-resident voters to be permitted some flexibility in terms of being able to provide alternative identification when they go to vote. Every person deserves to exercise the right to vote, and this should be honored by making the process as quick and smooth as possible.