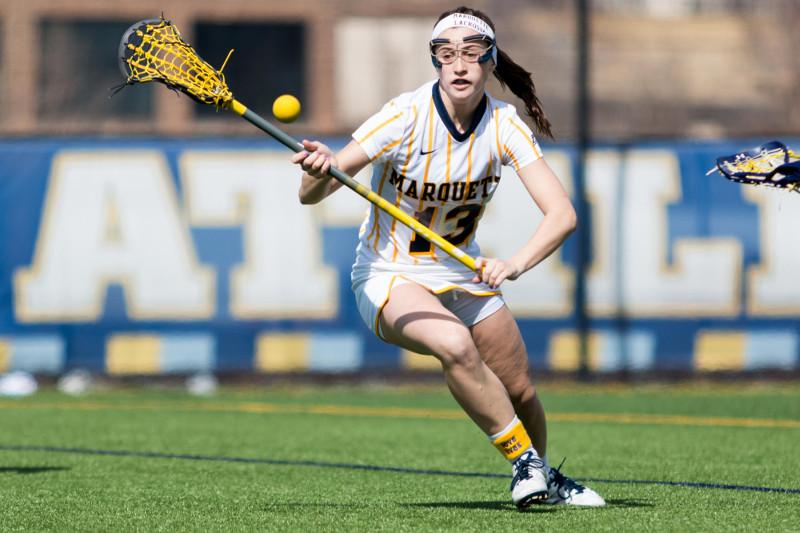 At first glance, Julianna Shearer is the opposite of intimidating. The junior attacker from Westminster, Maryland stands just 5-foot-3, an easy player to overlook for opponents.

“When you see her, you wouldn’t expect what you get from her on the field,” women’s lacrosse head coach Meredith Black said.

Shearer is experiencing a breakout season for the Golden Eagles. She leads the team with 24 goals, good for fifth in the BIG EAST, and is four shy of setting Marquette’s single-season record. Her production on the field has helped Marquette reach double digits in scoring five times and a 1-0 start to BIG EAST conference play.

“She’s really finding her niche as a player,” Black said. “She has great speed and hustle and is great off the draw. She just brings a lot to our team. She works for and earns everything she has.”

“She gets the job done,” Haverstick said. “Whenever the ball is on the ground, you have all the faith in the world she will get it. I would almost call her like a magnet; wherever the ball is, she is.”

Things have not always been bright for Shearer. She tore her ACL her freshman year and was sidelined for nine months, taking a full year for Shearer to recover fully from the injury. She had some success in her sophomore season, scoring 12 goals and one assist, but wasn’t at the level she has been at this year. Shearer believes the biggest obstacle she had to overcome after her injury was her mental state.

“I just came back the best I could,” Shearer said. “I was just trying to get back in the groove of things, but it was different playing again.”

After last season Shearer realized she needed to start clean and clear her mind.

The Golden Eagles could not have asked for a better season for Shearer to step up. Last year’s leading point-scorer Claire Costanza suffered a season-ending injury in the fall.

Black said Shearer realized she would have to fill the role as best as she could and was not surprised she has done it so well.

“Watching her freshman year, before she got hurt, I was really excited for her career,” Black said. “Now that she’s playing her career, she’s definitely living up to it.”

The one thing in common everyone had to say about Shearer was her competitiveness. Shearer said she takes it very personally when she loses, even at practice. She credits her competitive nature to her time growing up in Westminster with her neighbors, who she called her second family.

“We all played lacrosse, so we would have pickup games in the neighborhood. We called it rough, tough stuff,” Shearer said. “There were no rules. There was a lot of blood, sweat and tears.”

Shearer said she’d rather see her team play well in conference play than her personally getting the scoring record. Coming into the season, Shearer believed this was the best team she would play on.

“Before the season even started I had really good vibes, like this is our season,” she said. “We’ve seen what we are capable of, now we just have to take that into the rest of the season.”

Shearer has a chance to break the record on Saturday when the Golden Eagles take on UConn at Valley Fields.