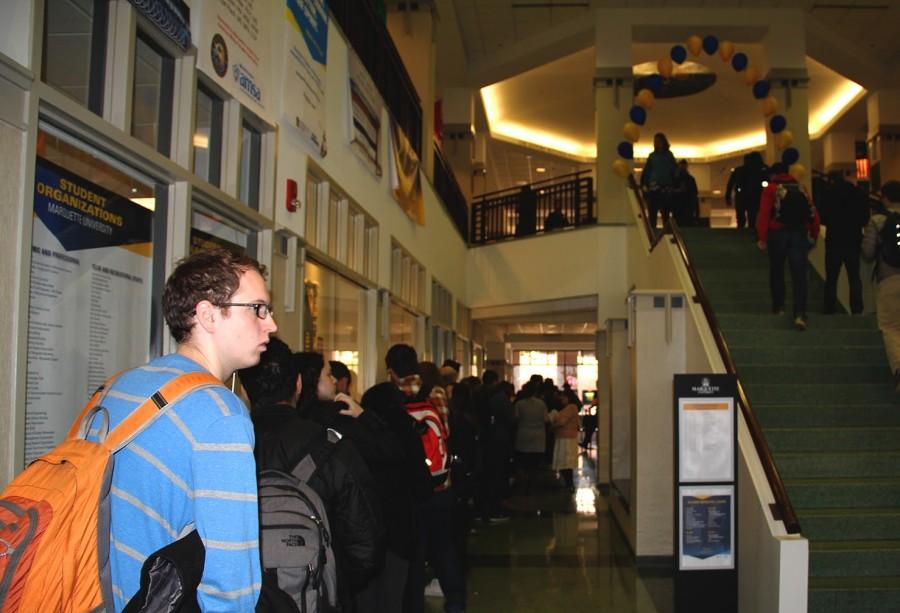 Students and other members of the community averaged a two hour wait time to vote in the primary election. Photo by Isioma Okoro-Osadene/isioma.okoro-osadene.marquette.edu

Hundreds of citizens waited for hours on Tuesday for voting registration in the Wisconsin presidential primary at Marquette. The two-hour-plus wait frustrated voters and attracted national news media attention.

“The most likely people to be affected are those without a valid Wisconsin driver’s license,” said Paul Nolette, assistant professor in political science. “This includes college students, who may either not yet have a license or have an out-of-state license.”

The new voter ID laws caused commotion among student voters because without a Wisconsin driver’s license, students had to obtain a voter ID at the Union Station in the Alumni Memorial Union to be eligible to vote. Marquette offered free voter IDs to help students who live outside the state of Wisconsin.

“The new voter ID law is controversial because of the potential of the requirements preventing significant numbers of people from voting,” Nolette said. “Somewhere around 300,000 Wisconsinites do not have an ID that is acceptable to vote, particularly driver’s licenses. In some cases it might be difficult for them to get a voter ID. For example, obtaining a voter ID requires proof of identification, such as a birth certificate, but getting a birth certificate may be difficult or too expensive for some individuals.”

Nolette said the voter ID laws can negatively impact the amount of people who end up voting in the primary.

“While the overall effects don’t seem to be huge, there is some evidence that voter ID laws can discourage or prevent people from voting,” Nolette said. “For example, some studies have found that states adopting voter ID laws have decreases in turnout by about 2 percent or so.”

Shawn Frost, senior in the College of Communication, stood in line for an hour and a half and made it to the registration table before finding out that he had the wrong identification. Fortunately, he was allowed to come back with the right documents.

“If you look at the turnout, you can see that this is a pretty important election,” Frost, a black voter, said. “I’m glad to see people out here voting, especially minorities because we didn’t always have that right. So it’s just really nice to see people exercising that.”

Giulianna Sutkiewicz, a senior in the College of Arts & Sciences, spent over four hours at the polls.

A seasoned voter and special registration deputy, Sutkiewicz reached the polling booths only to realize she was unable to vote. Her registration was not for the wards offered in the AMU. She last voted at Marquette in the local primary this February and was confused as to why she couldn’t do so this time.

Sutkiewicz began speaking with students, poll workers and the media to try to understand the registration delays.

“I thought it was more important, at the time, than for me to vote, to figure how to make this more efficient and get more people in here,” she said. “There are so many votes that are being lost right now because of this.”

“There are community members who are in this line, and this should not be their voting experience either, waiting with 200 Marquette kids,” Sutkiewicz said.

Latasha Alexander, a resident of the Avenues West neighborhood, was willing to wait as long as she needed, despite having three young children with her and being well into her pregnancy. She stood for over two hours, pushing her son forward every few minutes in an office chair.

“My vote’s going to count, but it’s important for everybody to get their vote out there,” Alexander said. “(It’s about) helping out kids with the future.”

She said she has not waited this long in the past to vote in a primary, but that she will still vote again when the time comes in November.

Several students could not help but look at the bright side of the situation—the large turnout.

“There is something in the air politically, where people are trying to get mobilized and get out to vote,” said Daniel Bernard, a senior in the College of Arts & Sciences. “I think the fact no one is prepared for (this turnout) is kind of telling of how surprised everyone is, including myself.”

University spokesman Chris Jenkins acknowledged the need to adapt to what came out to be the highest voter turnout in a Wisconsin presidential primary since 1972, at 47 percent of the eligible voting population.

“We are very proud that our students turned out to vote and are engaged in the political process,” Jenkins said. “Some of our students did face a significant wait yesterday, particularly those who needed to register. We have a strong working relationship with the Milwaukee Election Commission, which did increase the number of staff working to register students to vote throughout the day. We will work with them to assess needs as we move toward the November election.”

Still, the frustration in the room was evident as some students stood patiently because of busy schedules.

“I feel that the system was created as an intentional hindrance to the student vote,” Samantha Skach, a senior in the College of Education, said of the new voter ID law. She explained that students changed their addresses almost every year, forcing them to get a new ID each time.

She wondered if there was more she could have done to prepare.

“Should I have had more foresight about this process? Should I have been expecting this to happen?” Skach asked. “I feel like I’m a relatively informed voter on campus. I’ve been doing my research. If I didn’t know, then I feel like a lot of people didn’t know.”