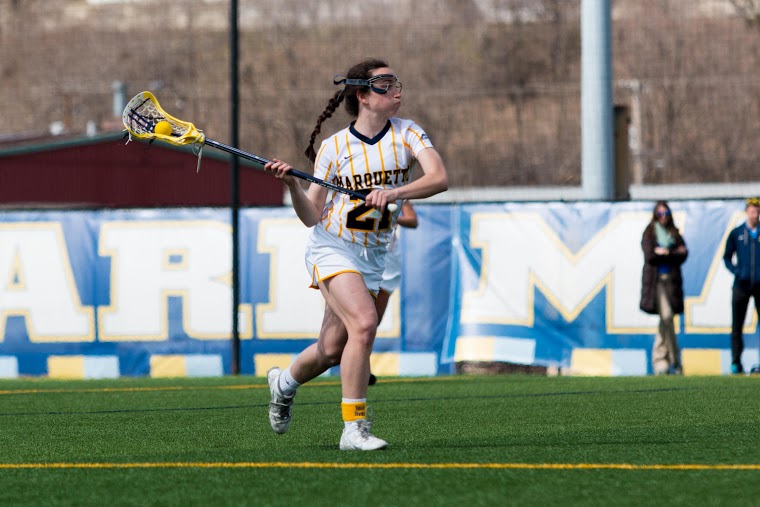 In a dominant performance, the Marquette women’s lacrosse team beat Villanova Saturday afternoon 15-6 to earn its first BIG EAST win. The team set a program record for goals against a conference opponent and outshot the Wildcats 36-22.

“We had great fire coming out of the gates,” head coach Meredith Black said. “The biggest difference is that we played as a team. We backed each other up.”

With the win Marquette improved to 4-7 and matched its conference win total from last year as the team looks to qualify for the BIG EAST tournament for the first time.

The Golden Eagles jumped out to an early three-goal lead behind junior attacker Julianna Shearer who added to her team-leading 24 goals, which ranks 4th in the BIG EAST. By halftime, Marquette had a commanding 9-3 lead and Villanova would not get closer than five goals the rest of the way. The team reached double digit in scoring for the fifth time this season as eight different players would go on to score for the Golden Eagles.

One previous area of concern for Marquette were the turnovers it committed. On Saturday the Golden Eagles only committed 17 total turnovers. Black said the team worked on addressing this issue before the game.

“I think we just treated this game as a new season, so I think our team had a lot of confidence going into it,” Black said. “They didn’t put pressure on themselves, and when you don’t put pressure on yourself your less likely to turn the ball over.”

Marquette’s defense proved stout again as it registered 10 caused turnovers leading Marquette. The Golden Eagles’ defense held reigning BIG EAST offensive player of the year Jackie Froccaro to just one goal. Froccaro, who leads the Wildcats with 23 goals, had difficulty finidng the back of the net thanks to senior defender Biz Goslee and the rest of Marquette defense. Black emphasized when the defense plays well it makes everything easier.

“When the (defense) plays well it gives new energy to the offense,” Black said. “When the offense sees the defense cause a turnover they want to return the favor and score a goal. It creates that teamwork mentality.”

Next up for Marquette is Connecticut (8-2, 2-0 BIG EAST) which travels to Valley Fields Saturday afternoon. UConn is coming off a dominating win of its own, beating Cincinnati 17-6 on Saturday. The Huskies have recently received votes in the latest Inside Lacrosse Top 20 poll and will be a tough test for Marquette.