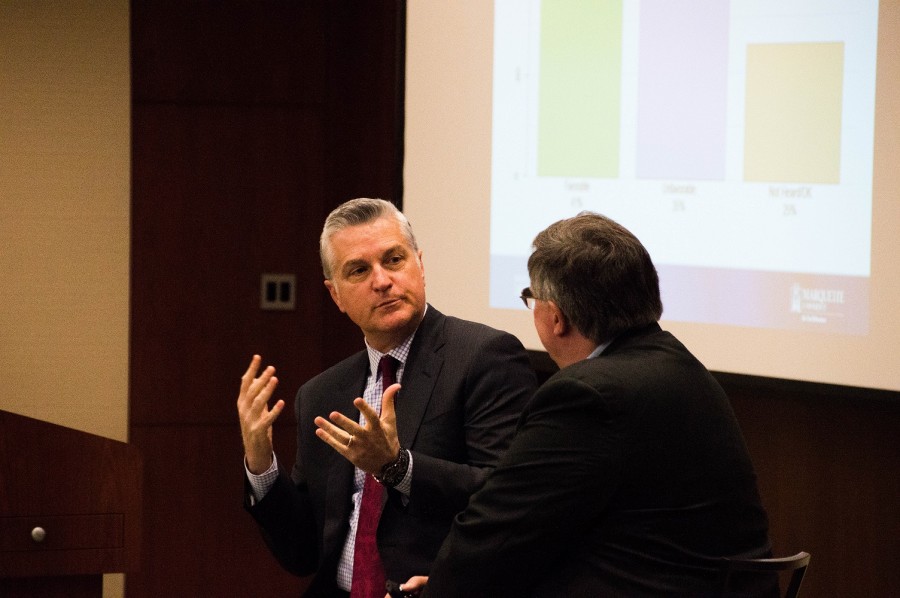 Of 1,405 respondents in the most recent Marquette Law School Poll, 957 said they are likely to vote in the April 5 Wisconsin primaries.

“Trump has not moved from the 30 percent we had him at back in February,” Franklin said. “Cruz has been the real beneficiary, basically doubling from 19 to 40 percent. On a percentage basis, Kasich had moved up even more, from eight to 21.”

In addition, both Republican and Democratic likely voters were asked which candidates they would be very uncomfortable with as president.

According to the presentation, Trump came out on top at 55 percent, while Clinton followed at 47 percent. Comfort levels for Cruz and Sanders are fairly the same at 37 and 36 percent, respectively. However, according to the law school’s official report on the results in this category, Trump received 56 percent, Clinton has 42 percent and Cruz and Sanders are at 32 and 12 percent, respectively.

“It’s that Kasich guy, who doesn’t seem to be likely to win if you ask Republicans, who actually gets a lot of the vote and who only 10 percent of the public at large, both Democrats and Republicans, say would make them uncomfortable as president,” Franklin said. “Clearly that has not been enough to propel his campaign into winning multiple states.”

For the Wisconsin Supreme Court Justice election, 41 percent of likely voters said they would vote for Rebecca Bradley, who ran into controversy at the beginning of March. Thirty-six percent would vote for JoAnne Kloppenburg, and 18 percent haven’t decided or haven’t heard of either candidate.

For the U.S. Senator election, 48 percent of likely voters said they would vote for Russ Feingold, 45 percent would vote for Ron Johnson and four percent haven’t decided or haven’t heard of either candidate.

The poll results were presented and discussed Wednesday. Christine Wilczynski-Vogel, associate dean for external relations, events and facilities, said the presentation received one of the largest crowds since the law school began conducting polls in 2012.

Before starting the presentation, Franklin apologized for the results being leaked Monday. He said the law school has a strict policy of no early release when it comes to poll results.

“Files became visible and accessible in a way that they weren’t intended to become,” Franklin said. “So it was a slip on (the law school’s) part. It was not a nefarious hack or anything.”