On patrol: A shift in the life of an MUPD officer 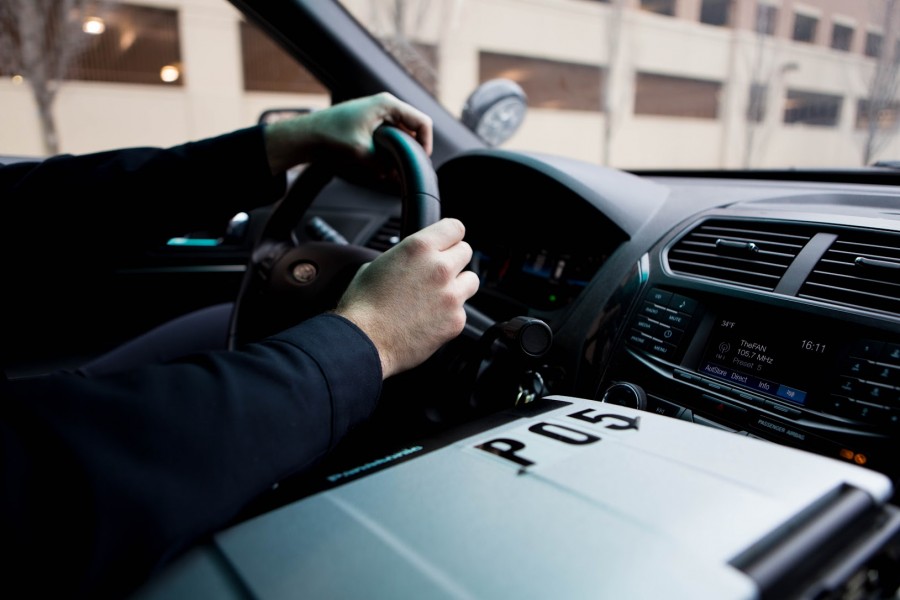 It's typical for an officer to receive gawking stares from people on the street. Most of them get adjusted to it. Photo by Ben Erickson/benjamin.a.erickson@marquette.edu

After pulling the speeding driver over near the 800 block of Michigan Ave. where the speed limit is 30 mph, Hernandez radioed in his location, the vehicle color and model, license plate state and number, the number of occupants and reason for the stop.

His call was cleared with a quick “10-4.” Hernandez then stepped out and talked to the driver. Upon returning to the patrol car, he entered the driver’s license information on the mounted vehicle laptop to check if the license was valid and if the driver had any outstanding warrants.

While Hernandez read the information, his backup officer arrived. Unlike the Milwaukee Police Department, which generally has two officers patrol together, the Marquette Police Department calls backup for every stop.

After giving the driver a verbal warning, Hernandez sent him on his way. It was a brief, efficient stop that took about eight minutes.

Hernandez worked at Marquette for nearly seven years as a public safety officer and now as a police officer. Previously, he was an infantryman in the United States Marine Corps and Marine Corps Reserves for a total of 12 years.

Hernandez works from 4 a.m. to noon every other Monday. Otherwise, his shifts are from 6 a.m. to 6 p.m. He enjoys the regular hours day shifts provide, but misses the action and challenges that accompany the night shift which he used to work regularly.

The patrol car interior does not resemble a normal cars. The back seat is modified for holding subjects in custody, featuring no interior door handles. In the front seat, the aforementioned laptop and small printer are between the driver and passenger seat, and a camera is attached to the passenger-side windshield. There are also several switches on the driver’s side for various exterior lights like a spotlight and alley lights.

About 15 minutes after the speeding stop, Hernandez assisted a citizen with an apparently disabled truck partially blocking the intersection of 20th and Clybourn Streets. Another patrol car relieved Hernandez a few minutes later and he was back on patrol.

Hernandez explained that he controls and decides his own patrol route. He tries to vary his route every shift so criminals cannot figure out a pattern.

“When I first start my shift, I’ll hit every street, every alley once so I get a good picture of what is going on,” he said. “When I go by (the areas) a second or third time, I may notice something different and act upon that.”

Hernandez said it took him several months to get used to the patrol area, but he now knows it “like the back of (his) hand.”

Patrol officers aren’t always out on the streets writing tickets. They perform a variety of tasks while on duty.

“One could be in an investigation right now, another car is running Lidar to see how fast people are going and another officer could be doing a check of a business,” Hernandez said.

Hernandez also makes a point to converse with citizens throughout his patrol.

“A lot of times I just stop and talk to kids,” he said. “I have baseball cards I like to pass out. I try to build community relations. Kids, especially little kids, are really interested in what a police officer does. I think a lot of times they think that police are bad, and it’s like ‘no, we’re here to help. Whatever you need, you give us a call.'”

One thing instantly apparent while driving: nearly all drivers and citizens gawk at police cars, something Hernandez quickly adjusted to.

“People will stare at me all the time,” Hernandez said. “A lot of times I’ll just wave. Especially if someone’s mean-mugging me.”

If Hernandez does talk to someone who looks suspicious or he makes a traffic stop, communication is vital.

“This job requires really, really good verbalization skills,” he said. “You have to be able to talk to people and empathize but at the same time be able to control the scene. It’s all about staying cool, calm, collected.”

“The biggest thing to teach a cop is that a lot of times when somebody is hostile toward them is that it’s not a personal attack,” Kranz said. “This staff, because they didn’t start as police officers, are very, very patient with people. I’ve been very impressed.”

There was a jolt of adrenaline near the end of the shift when Hernandez stepped on the gas to pull over a driver who failed to yield to a pedestrian in the crosswalk in front of the Helfaer Recreation Center on 16th Street.

The driver had a clean record, valid driver’s license and was very cooperative. Hernandez gave him a verbal warning.

While Hernandez enjoys his job, he is aware of its risks.

“At the end of the day, being a police officer is a dangerous job,” he said. “Our job is to keep you guys safe and sometimes we run into some interesting things.”

Ride-alongs are available to the public. The only requirements are wearing a bulletproof vest and staying in the patrol vehicle during a stop. “Anyone can come in if they’re curious to see what it is we do and they can do a ride-along,” Kranz said. “Part of being transparent is letting people see what it is we do.”