MLAX riding four-game win streak into battle with No. 6 Villanova 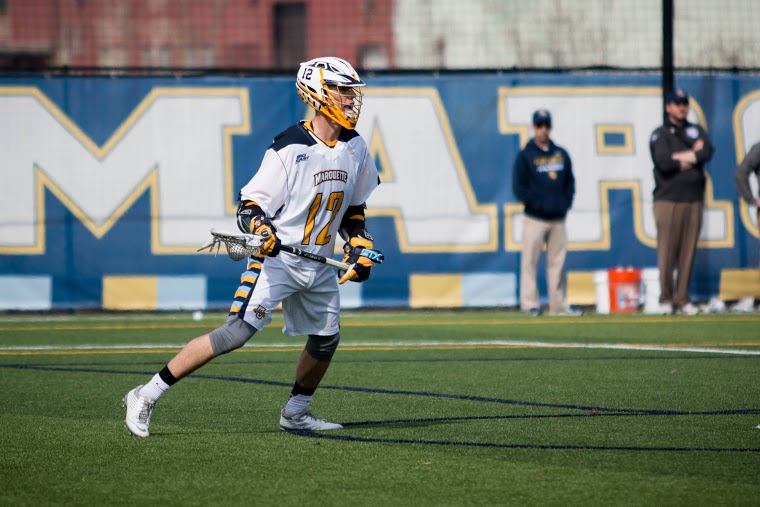 Marquette sits atop the BIG EAST standings for at least one week based on a technicality: the game against Georgetown was the first BIG EAST game for any team in the conference. Nevertheless, the Golden Eagles are in a very good position seven games into the season. Marquette sits at 6-1, its only loss to Ohio State.

Over spring break Marquette took care of business against Quinnipiac, defeating the Bobcats 11-5. It was a tougher outing against Georgetown, who looked much better than their 1-8 record. Marquette defeated Georgetown 9-8, as the Hoyas’ goal in the closing seconds was waived off due to a shot clock violation.

“That’s a team that just really hasn’t found their stride yet,” Marquette head coach Joe Amplo said of the Hoyas. “I think at some point later on this season they will. For us, any win is a good win. To be 6-1 in Division I lacrosse, especially this year with the way scores are going, you’ve got to be satisfied.”

The past three games have been an adjustment for the team, as midfielder Kyle Whitlow was knocked out for the season with a knee injury he suffered in practice. Blaine Fleming, Tanner Thomson and Andy Demichiei have formed the new starting midfield unit. The Golden Eagles’ depth at the position has helped soften the blow, but it’s still a work in process.

“They’re getting there,” Amplo said. “We need some more production from guys, but you look at a kid like Brett Hornung. He’s playing in his first college games and he’s a senior who understands what it takes. Now he’s doing it at full speed. Henry Nelson, and John Wagner, who’s a freshman playing out of position, Robby Pisano, those guys need experience.”

The offense is still running through Ryan McNamara, who scored a career-high five goals against Georgetown last weekend, his fourth game with four or more goals this season.

“He’s playing at such a high level,” Amplo said. “We know teams are going to key on him. Conor Gately is doing his job and he needs to continue to increase his production. At some point one of these other guys, we’re hoping, will step out.”

Like last season, Marquette’s toughest stretch is the second half of the season. Four of the final six games are against teams ranked 11th or higher, starting with this weekend’s game against No. 6 Villanova. The Wildcats will be extra motivated, coming off an 19-8 shellacking by No. 3 Brown.

“Every time they go on the field offensively they have six guys … that can kill you,” Amplo said.

Villanova’s strength matches up perfectly with Marquette’s. Led by Senior CLASS Award finalist B.J. Grill and Liam Byrnes, the Golden Eagles’ defensive unit ranks second in the nation in scoring defense, only behind No. 2 Notre Dame. Marquette hasn’t played in many shootouts. The Golden Eagles have scored ten or less goals in four games, going long stretches in games without scoring. But when the offense is in a drought, the defense steps up.

“For us, that’s the soul of our team right now,” Amplo said. “It’s the most consistent. Defense can never rest. Whether the offense is on or off, the ball is always going to come down to your end. You’re going to have to get stops to win games. We know we’re going to have a lot of pressure on us this week against what I consider the absolute best offense in the country.”

The game could come down to a few possessions, which makes a star-studded matchup at the face-off X crucial. Marquette’s Zack Melillo is 6th in the NCAA in face-off percentage, and Villanova’s Luke Palmadesso is 10th.

Face-off is set for 1 p.m. Saturday at Valley Fields.