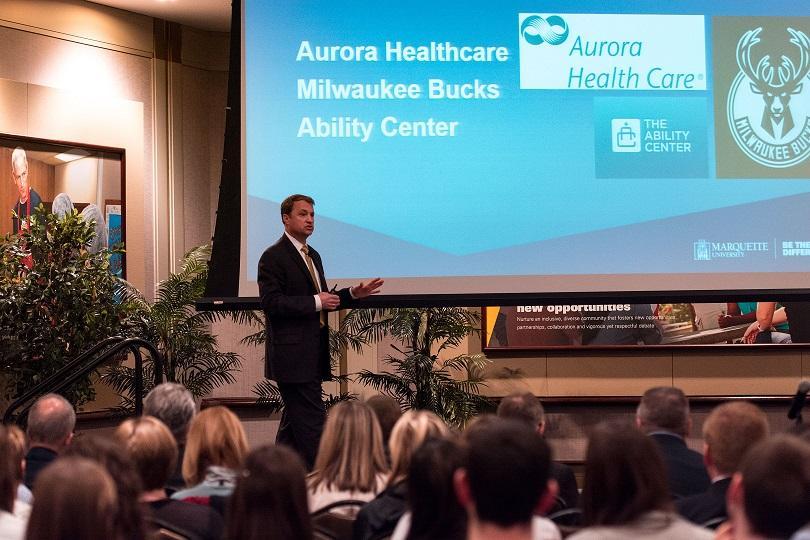 An open forum was held for the Marquette community this week to discuss the university’s future Athletic Performance Research Center and the student health objectives it will focus on.

The center will be located in the 800 block of W. Michigan St. and is expected to break ground in 2017. It was announced during University President Michael Lovell’s inauguration speech in 2014. It will cost $120 million and be 300,000 square feet.

Lora Strigens, associate vice president for finance, said the university wants to use the center to build community.

“This facility gives us an opportunity to elevate what we have available to our overall student population,” Strigens said.

The center is a collaboration between Marquette and Aurora Health Care, which is investing $40 million in its construction. Included in the center will be indoor playing fields for university athletes and an athletic performance research area led by researchers and clinicians. Strigens said the research will focus on human performance, sports and health sciences.

At this stage, the building will be used by men’s and women’s lacrosse, soccer and track and field teams, some of which don’t have locker rooms.

During the forum, Marquette’s Jesuit and Catholic values were referenced in the context of creating a space for the overall health and well-being of individuals.

The need for a new facility was cited as a lack of formal spaces for faculty, students and athletes to collaborate on research, engage in competition and promote a more intertwined educational and athletic community from which everyone can benefit.

Director of Intercollegiate Athletics Bill Scholl said he’s surprised that Marquette athletes are as successful as they are given some of the limited resources they currently have.

“There are so many things that will be happening around this building,” Scholl said. “It’s really exciting for me and for our student athletes.”