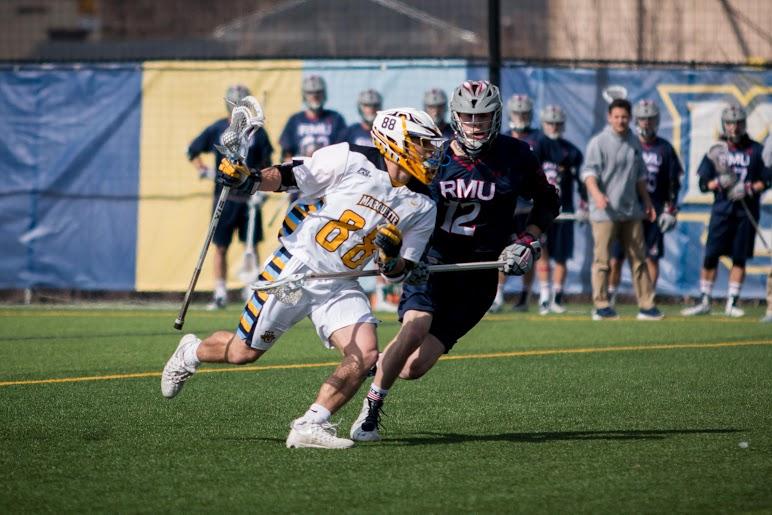 Marquette played its first game without Kyle Whitlow, who will miss the rest of the season with a knee injury. Head coach Joe Amplo said he sees Thomson and Andy DeMichiei, who scored a goal, as two of the players that need to step up offensively to replace him.

“It’s going to take an army to replace Kyle,” Amplo said. “You saw a little bit of that today … Everybody did their part.”

“Obviously he’s a great player, but the type of kid he was – a leader – the impact he had on the program is second to none,” Gately said. “He’s still with us. We’re playing every game for him.”

Thompson and DeMichiei were both inserted to the starting midfield unit alongside Blaine Fleming, as Amplo moved Ryan McNamara, who is leading the team in goals, down to attack. The move paid off from the start, as McNamara scored the first two goals of the game.

“He’s our best player,” Amplo said. “Him and Conor Gately are our two most potent offensive players. We want to have our best guys on the field. I think that’s his natural position.”

Zack Melillo had another strong showing at the faceoff X, winning 17 of his 22 draws. Jimmy Danaher made six saves in net.

The Golden Eagles scored five of their 13 goals in the second frame, all from different scorers. Despite a slow first quarter that saw only two goals, Marquette found itself up 7-1 midway through the second and up 8-3 at the half.

“I think we did a good job moving the ball,” Thompson said. “It opened up the field a little bit so we could score some goals.”

Robert Morris switched goalies to Alex Heger in the second half, and the Golden Eagles’ offense began to dry up. It took 13 minutes before Heger was beat by Gately for Marquette’s 9th goal.

“Robert Morris plays really fast and they make the game hectic and crazy,” Amplo said. “We got caught up in that. We lost our dicipline and our poise for that stretch. The game seemed out of control because they’re a good team and they do things that speed up the game.”

The Colonials were able to force Marquette into mental mistakes, and when Marquette did get good chances, Heger made timely saves. Gately chalked up the inconsistency to adjusting to a new unit.

“Losing (Whitlow) is tough,” Gately said. “We’re just trying to find that click with the new unit we’ve got going. Some middies stepped up, but we’ve still got to play 60 minutes.”

Robert Morris was able to inch closer late in the second and into the third, but absent from the scoresheet was Robert Morris’ leading scorer, Luke Laszkiewicz. The 20-goal scorer had seven tallies last week against Air Force, but was shut down today by B.J. Grill.

“Grill never ceases to amaze me,” Amplo said. “That kid is as hard of a guard as we’re going to see … Both coaches I spoke to earlier this week, the High Point coach and the Air Force coach, both coaches said the same thing. He’s one of the best kids that they’ve seen all year. Those are guys who’ve seen Denver and Virginia already.”

While Marquette’s offense struggled, the defense stood tall. It only allowed one goal during the third quarter scoreless drought, putting Marquette in a good position when the offensive unit settled down in the fourth. Four straight fourth quarter goals sealed a comfortable win for the Golden Eagles.

The win moves Joe Amplo and the program to .500 all-time (25-25). The Golden Eagles travel east next week to play Quinnipiac for the first time in program history.