Alumna Rebecca Bradley under fire for controversial writings from 1992 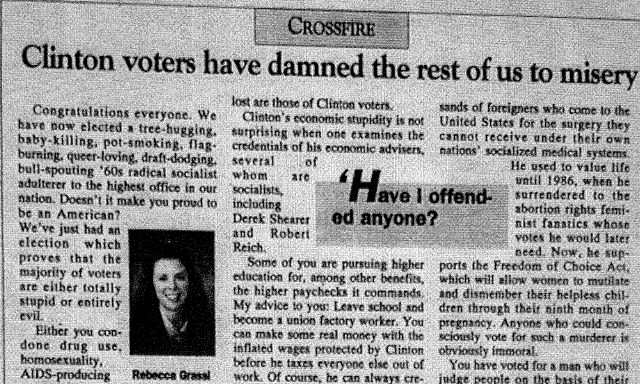 In one of her pieces Bradley wrote, "Heterosexual sex is very healthy in a loving marital relationship. Homosexual sex, however, kills." Photo via media.jrn.com; Published in The Marquette Tribune on Nov. 11, 1992

The writings were columns and letters to the editor published by The Marquette Tribune under her maiden name Rebecca Grassl. Bradley graduated from the College of Business Administration in 1992 with an Honors B.S. in business administration and economics.

“Either you condone drug use, homosexuality, AIDS-producing sex, adultery and murder and are therefore a bad person, or you didn’t know that (Clinton) supports abortion on demand and socialism, which means you are dumb,” Bradley said in one of the pieces.

Bradley released a statement to apologize and say her views changed since the pieces were published. Wisconsin Gov. Scott Walker, who appointed Bradley to her current position, said he was not formerly aware of the writings, according to a March 7 Milwaukee Journal Sentinel report.

Charles Breeden, associate economics professor emeritus, said Bradley was in his economics and law class in 1992. He encouraged her to go to law school and they kept in touch throughout her professional career.

“(Bradley) was one of my best students in class,” Breeden said. “She excelled.”

Despite the writings, Breeden said he didn’t see any intolerance from Bradley while she was his student. He said he saw, and still sees, nothing but “the finest awareness and sensitivity from her.”

“She just went on a tirade — she kind of vented,” Breeden said about Bradley’s writings. “She used language I’m sure she regrets and regretted at the time, but, you know, she was on a roll.”

The writings were released by the progressive group One Wisconsin Now about a month before the April 5 election that will decide if Bradley will get a 10-year term on the state Supreme Court, according to the Journal Sentinel.

Breeden said it pains him to see the writings making news since they are 24 years old. He thinks Bradley grew up since graduating from Marquette.

“She’s a reasonable, sensible person,” Breeden said about Bradley. “Her perspective as a professional attorney and judge is much more matured and nuanced than when she was an undergraduate (student), and you’d expect that.”

State Appeals Court Democratic Judge JoAnne Kloppenburg, Bradley’s election opponent, criticized the writings, calling them “abhorrent and disturbing,” according to the Journal Sentinel. Democratic Sen. Tammy Baldwin called them “hate speech” and questioned how fit Bradley is to continue serving in her position.

“Heterosexual sex is very healthy in a loving marital relationship,” Bradley said in one of her pieces. “Homosexual sex, however, kills.”

Bradley was appointed to the state Supreme Court in October 2015 to finish the term of late Justice N. Patrick Crooks, according to the Journal Sentinel. One Wisconsin Now and the liberal group People for the American Way called for Bradley to resign — but her campaign manager said that won’t happen.

Breeden said he’s kept in touch with Bradley through volunteer boards and organizations they’ve been on together.

“I still give her my 100 percent endorsement and support for her role on the Wisconsin Supreme Court,” Breeden said.

Bradley worked as an attorney at the Hinshaw & Culbertson LLP law firm from 1996 to 2000.

“When (Bradley) was here she was a capable and effective lawyer,” said Thomas Schrimpf, a partner at Hinshaw & Culberston.

Bradley attended a fundraiser in 2013 for the gay rights group Fair Wisconsin, according to the Journal Sentinel. She declined to release her opinion of the U.S. Supreme Court’s ruling last summer to make same-sex marriage legal nationwide.