Farrell brings strong resume from across the pond 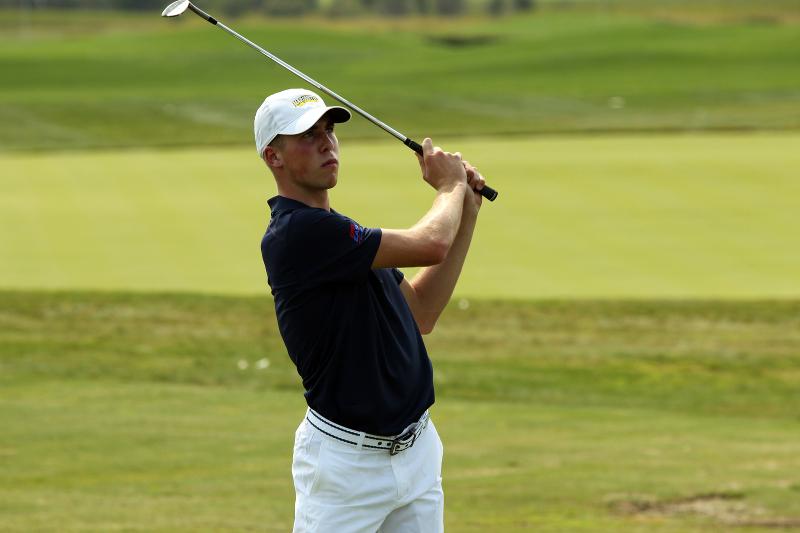 Oliver Farrell landed far from home to continue his golf career, traveling 3,800 miles from Worcestershire, England to play for Marquette this season. He brings a pedigree of success to a team that won its first BIG EAST title last year.

Before coming to Marquette he played for  the Worcestershire men’s first-team, which went unbeaten in his time competing for them. He won the 2014 Worcestershire Open title, represented England in the Nations Cup and was ranked as one of the best amateur golfers in England at 56th.

Naturally, he was an alluring prospect for head coach Steve Bailey.

Farrell became aware of Marquette when Bailey made a trip to see him compete in England. Farrell was immediately intrigued. He would officially sign his national letter of intent in November 2014.

“As soon as I learned about the school, the program, and everything it had to offer, it was perfect for me,” Farrell said. “It made it a pretty easy choice to come here.”

It had been a dream of Farrell’s to play golf at a high level since he was a kid, and regardless of the great distance between Milwaukee and Worcestershire, his parents were immediately supportive of that dream.

“They kept telling me that this was the opportunity of a lifetime and that you don’t want to look back at it in the future and wish you had done it,” Farrell said. “They made sure I decided what I wanted to do, and they supported that.”

The decision has paid off – he’s already making a name for himself in the United States. In October, he was named the BIG EAST Golfer of the Month when he finished tied for eighth at the 66 person field Erin Hills invite, and finished seventh in the 84 person Price’s Give Em Five Invite.

“That’s quite impressive as a youngster,” Bailey said.

It took time for him to adjust to a country he had never even visited before committing to Marquette.

“I’ve had to be very independent and obviously look after myself, and manage things that I didn’t think I’d have to do for a while,” Farrell said.

He credits his fellow teammates and the coaching staff for his mostly smooth transition. He specifically notes the chemistry the team shares as both friends and competitors.

“I think without them it would have been a very difficult transition. It’s like one big family and they’ve made me feel welcome,” Farrell said.

With his rigorous practice schedule often beginning at five in the morning, Farrell will certainly have the chance to improve.

“I think based on how well I hit my irons last year, putting was considered a weakness of mine,” Farrell said. “I’ve spent a long time over the winter working on that, making sure that’s ready for the season ahead.”

Aside from Farrell’s self-declared skill in his driving and iron games, Bailey was even more impressed with a skill that doesn’t show up on the scorecard: dedication.

“He put so much effort into his preparation. He has a motor like I’ve never seen before in my 11 years of coaching,” Bailey said.

For Farrell, the sky is the limit, and his high level of play matches his big goals for the year, which include winning a collegiate event this semester, being ranked first in the BIG EAST, and of course helping the team win a second consecutive BIG EAST trophy.

“I always try to make everything as challenging as I can so I try to make practice tougher than what competition will be,” Farrell said. “So when I get on the golf course competition seems fairly easy compared to what practice was.”