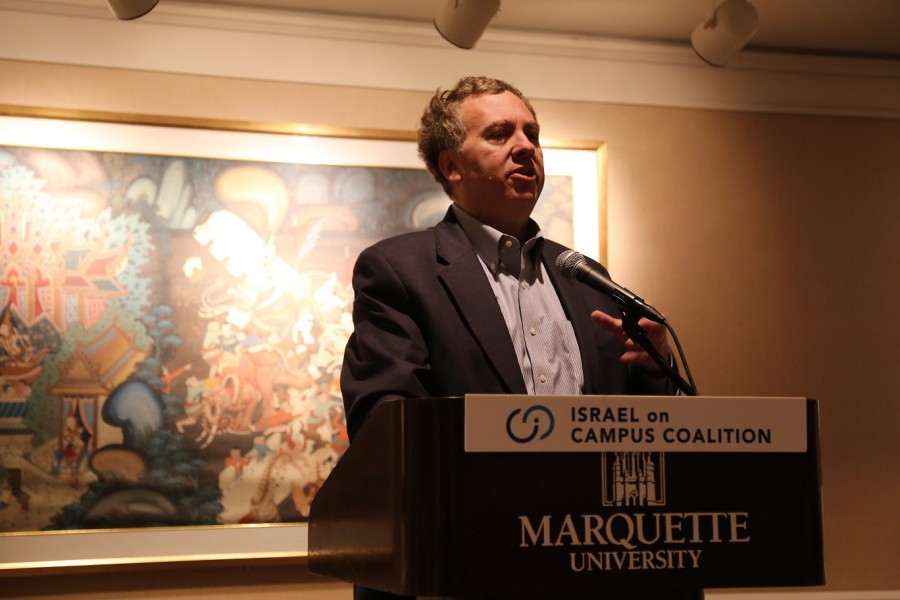 David Makovsky, who brings first-hand experience and policy nuance to the Israeli-Palestinian conflict, spoke at Marquette on Tuesday about about seeking justice and strengthening peace in the Middle East.

Makovsky was a journalist in Israel from 1989 to 2000 and mainly covered the process to gain peace. He was a member of Secretary of State John Kerry’s negotiating team from November 2013 to September 2014 and made significant efforts to bring peace between Israel and Palestine.

Makovsky sat down with the Wire to discuss the Israeli-Palestinian conflict and if he thinks there will ever be peace between the two countries.

Marquette Wire: Why did you decide to come speak at Marquette?

David Makovsky: “I care very much about the discourse on American campuses. I’m concerned that there’s a new generation of millennials who have no memories of the hopeful days in the 1990s. And I worry that, in more difficult times, the millennial generation will be the first to give up because they have no reservoir of experiences to draw on. I don’t want college students to give up on the idea of coexistence. I see it as a mission to go out to these students and try to see where they could come together.”

MW: What has been the general attitude of the students you have encountered?

DM: “They’re smart, but not always knowledgeable about the situation. So I can provide some context about how the parties have narrowed their differences. I feel that people come away seeing that there is some hope and the differences might not be unbridgeable. It’s also important to me that there’s civility on the campus. Bring people together, don’t rip them apart. Don’t rip apart a campus community. Find joint projects and social action that can bring people together.”

MW: Why has the Israel-Palestine area been filled with tension and conflict for so long?

DM: “You have had two competing national movements fighting for a small piece of land for around 100 years, and for a long time they didn’t recognize that the other one was there. There’s no doubt that people’s religious convictions fuel this. It’s not that both sides are completely stubborn and unreasonable, but each side has its own narrative of history and the narratives are not mutually compatible. We’re never going to solve the past, we can only solve the future. There are five core issues that still divide them: the borders of a two state-solution, security arrangements, if/how to divide Jerusalem, what do do with refugees and reaching a mutual recognition of the other state. When it comes to the Middle East, people assume that it’s hopeless, but I think if you take the long view, things have progressed a lot.”

MW: What did you learn about the conflict during your time as a journalist?

DM: “Being a journalist gives you a front row to history in a certain way. You can get under the fingernails of a country and try to understand some very difficult issues. I feel that working as a journalist gives you a lot of texture to the policy issues. Living over there, I realized that this is ultimately about people’s lives. It’s not an abstraction; these are real human beings and you want to try to find a way to end this tragic conflict that has engulfed both of these societies. Journalism provided me with the texture that I needed to grasp policy making. Everyone wants to contribute in whatever small way he or she can, to be part of something larger than themselves. If I can make a small contribution, I’m pleased to do so.”

MW: What was it like to be a part of the Israel-Palestine peace negotiations under John Kerry?

DM: “It was exciting. When someone says, ‘Can you help the United States and the cause for peace?’ how could I say no? We were trying to deal with the five core issues and so we went straight for those. I think it was a heroic effort by (Kerry) to try to lead it. It was probably the most intense effort the U.S. has ever delved into by trying to solve these five core issues. I was very honored to be a part of it.”

MW: Is this area of study a lifelong passion of yours?

DM: “It started when I was 17 when (former President of Egypt) Anwar Sadat made his electrifying trip to Jerusalem (in 1977) to try to end the Egyptian-Israeli conflict. That for me was a political coming of age. There were wars in 1948, ’56, ’67 and ’73, and I thought, ‘Are (Egypt and Israel) doomed to fight each other every few years?’ And Sadat ended that. If Sadat could do what he did, then other things are possible, so I wanted to devote my life and see what was doable in this regard. That was an inspirational moment for me that I look back on as a formative experience.”

MW: Will there ever be peace between Israel and Palestine?

DM: “Yes. There’s too much history and too little geography. I feel they don’t have a choice, they’re going to figure it out.”