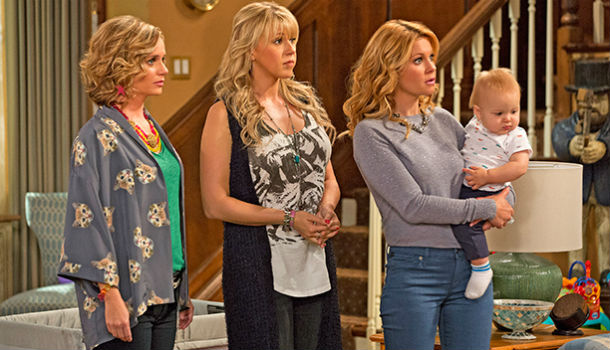 “I’m as mad as hell, I’m not going to take it anymore!” – Howard Beale

If we are truly in an era of peak TV, then “Fuller House” might be the thing that starts the decline. Now that seems like a harsh statement, but it’s absolutely true. Everything “Fuller House” does is provocative. Within the first four minutes of what seems to be an excoriating pilot, characters from the original series show up, with the laugh track cranked all the way up to fool people into laughing.

“Where is Michelle?” asks Stephanie (Jodie Sweetin) to her father Danny (Bob Saget), and for 15 seconds the entire cast stares straight at the viewer, looking deep into the audience’s souls as if to ask why they even bothered to do this without the Olsen twins. It’s uncomfortable, to the say the least, and feels like a cheap attempt to give the finger to both the twins and the audience, without using hand gestures.

Probably the most upsetting thing about “Fuller House” is how bored the original cast looks on screen. Bob Saget and Dave Coulier seem as if they don’t want to be there anymore. It makes sense, these two are more comedians for an older-adult audience.

Uncle Joey (Coulier) blaming technology as a part of society’s problems is an overused cliché, but so is constantly breaking the fourth wall. “Isn’t kind of sad when they drag out the old cast for some lame reunion show” asks Kimmy Gibbler (Andrea Barber). “Not when the show is adored by millions, and the stars are beloved cultural icons” replies Danny. It is this kind of arrogance that makes watching this show a challenge.

There’s no reward to watching. What you see throughout the season’s story line can easily predict what happens at the end. It’s insulting that a network like Netflix that houses shows like “Orange is the New Black” and “BoJack Horseman” could allow such slog for its subscribers to view.

For a show that is targeted for families with younger children, it’s surprisingly very adult. ​In the later episodes, the writing becomes more contrived, filled to the brim with sexual innuendos, toilet humor and pop culture references pandering to the same audience that allowed this monstrosity to return back from the grave. The catchphrases from the original appear with full winks and nods, self-congratulating itself with full-blown narcissism.

The original cast members show up out of the blue to help watch the kids for a couple of hours, usually unannounced but lead in with a hint from one of the main characters. Here are actual lines of dialogue introducing characters to the show: “She speaks English, and she’s hot!” for Shannon, an old friend of Stephanie’s from when she lived in England. Expressions like “You look fleek!” and, “Holy chalupas!” form new catchphrases, and they’re just as terrible as you’d expect them to be.

The new generations of kids that these moms are raising are insufferable. They run around screaming their lines and throw temper tantrums when they can’t get their way. In the pilot episode, Max Fuller (Elias Harger) nearly reaches the brink of tears because he can’t get one of the puppies the neighbor’s dog just delivered. Nearly every line Max has sounds like it’s been shouted through a megaphone. It’s loud and obnoxious; he never shuts up. The episodes don’t get better, they just stay in autopilot like the series was once known for, and kids who have grown up on Nick at Nite reruns are to blame.

If this was just a one-off, a reunion special that shows what these characters have done in the last 20 years, then it would be hard to fault for what this show is about.  The one question that fans will have about “Fuller House” is if it captures the spirit of the original. It absolutely does, and the sky is also blue, the grass is green and fire is very hot if you stick your hand in it.

You know what happened to predictability? We out grew it because we’re smarter than Jeff Franklin and his staff want people to believe. Look at ABC’s comedy lineup on Wednesday night – you’ve got three  incredibly solid family-centric sitcoms (“Black-ish,” “The Goldbergs” and “The Middle”) that are more thought provoking, hilarious and, above all, original. You want to see John Stamos in a good family comedy?  Go watch “Grandfathered” on FOX, it’s more of what “Fuller House” should be, and Bob Saget looked like he was having fun when he appeared as a special guest.

None of these shows spoon feed their comedy to the audience, and even shows like “Black-ish” can take serious topics and engage viewers to understand where they are coming from with an honest and moving episode of television. The “Fuller House” series has no point and should be pushed off a cliff.

With a dash of racism, sexism and punch-lines for jokes that go nowhere, “Fuller House” should just be left vacant. Let’s never speak of this again.