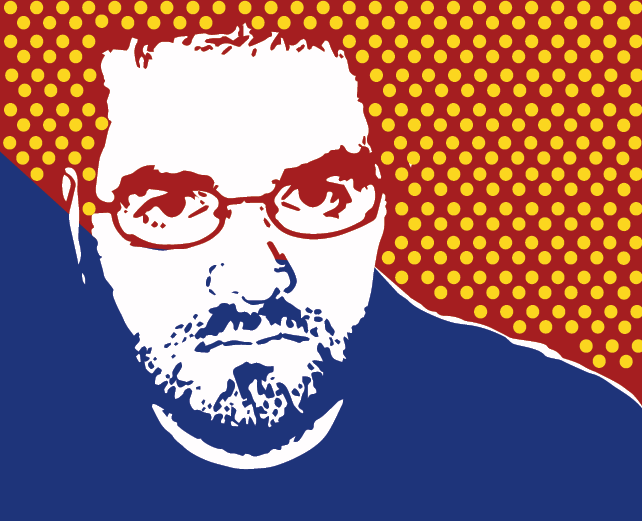 For many, comic books offer little more than “POWS!,” “BOOMS!,” “SPLATS!,” capes and colors. For the English department however, comic books can provide the literary heft, social commentary and educational value on par with the likes of Tolstoy, Joyce and even Shakespeare.

Gerry Canavan, assistant English professor, popular culture scholar and Marquette’s in-house expert on all things comic books and superheroes, is one of the leading figures behind the department’s initiative to expand class reading lists beyond the obvious classics and embrace the power and significance of graphical literary storytelling.

Among fanboys and nerds, Canavan can prove his street cred dishing on the latest story lines and weighing in on the eternal “Marvel vs. DC” argument. (He’s still a self-declared DC fan, though frequently crosses the forbidden franchise barrier into Marvel content). For literary scholars, he pulls his weight with in-depth analysis on social commentary and educational opportunities provided by the comic book genre.

“I think they’re really great in the classroom because they tend to interrupt people’s habits about how to read,” Canavan said. “(Comics) require you to read differently and pay more attention to form. They become a way to do English literary study: Almost (to) start from the beginning and take apart a form or medium in a new way.”

Outsiders and non-believers may scoff at the idea of comics being taught in the classroom, and Canavan acknowledges that. He recognizes, especially in the early stages of the medium in the 1930s and ’40s, the very nature of the medium means that seeking greatness in the writing was often never the original creators’ intent.

He does believe, however, comics have evolved into a legitimate literary platform.

“The form really takes you in new directions,” Canavan said. “A lot of (comics) are incredibly sophisticated and dark and force you to read in a new way. They’re really fun.”

“(English 1302) is interested in the ways in which we turn to earlier stories to try to tell our own,” said Leah Flack, an English 1302 instructor. “Bechdel uses the graphic form in a way that both affirms and challenges the cultural authority of the canon of high literature she engages in her work. One thing I have found to be important is to equip students to read the visual form – the use of images, blank space, style and the interaction between word and image… and they see that there is much more than meets the eye when they learn what to look for.”

For students who grew up reading traditional literature in English classes, shifting gears to graphic novels can be jarring at first. However, most grow to appreciate and embrace the unique style of storytelling.

“I think, at first, all of the students in my class thought it was pretty weird,” said Valerie Asimacopoulos, a freshman in the College of Arts & Sciences. “After reading ‘Fun Home,’ I realized that graphic novels mean a lot more than I give them credit for.”

Asimacopoulos also recognized how she grew to appreciate and understand the artistic and literary meaning behind each bubble, blurb, picture, and gutter “Fun Home” had to offer.

That’s not to say classic superhero stories shouldn’t be taught either. Canavan believes caped crusaders and crime fighters have always reflected our culture and remain an endless source of national allegory. This side of comic books is explored more in the Comics and Graphic Narrative class (ENGL 4717).

“(Superhero stories) have always reflected America and its sense of its own power or lack of power,” Canavan said. “In the ’40s, it’s very heroic and optimistic. In the ’50s and ’60s, it’s, ‘science can do anything.’ In the post-Vietnam era, power turns kind of toxic and sad, and ultimately kind of wicked in the ’80s with the Dark Age of comics.”

In the post-9/11 era, Canavan said, a return to superhero stories have been a way to demonstrate the attempt to renew American power. Though more recently, he believes, this return of superhero power has turned toxic as the nation deals with it’s own sins in the War on Terror.