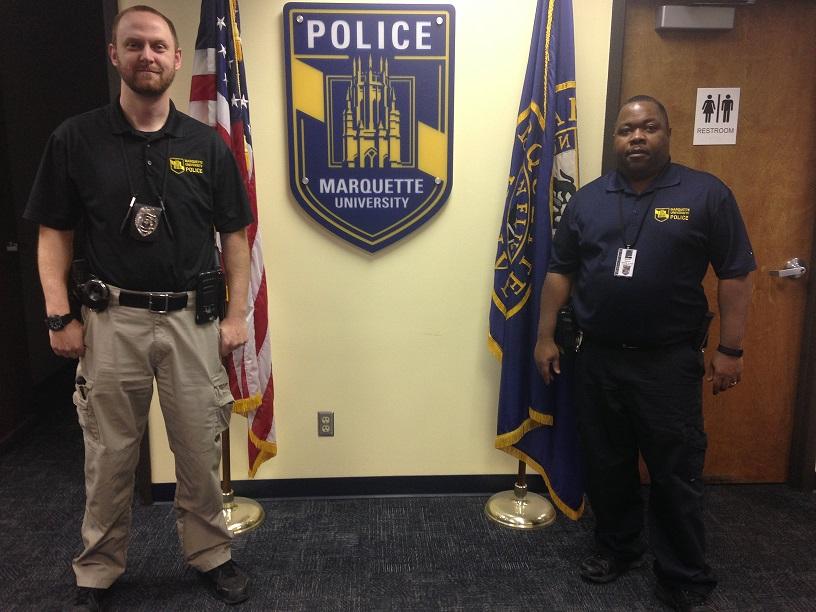 In addition to its staff of officers, the Marquette Police Department has two full-time detectives.

Billy Ball and Robert Krystowiak have been detectives for MUPD since its inception. They assist the department by thoroughly examining open cases – mainly burglaries, assaults and thefts. The Milwaukee Police Department investigates most shootings, as those cases may have connections outside of MUPD’s patrol area.

“There are going to be some cases that require a little more follow-up, a little more looking into, and that’s what we’re here for – cases where there’s a little more behind the scenes,” Krystowiak said.

If it takes longer than the time of one patrol shift to follow up on a case, Ball and Krystowiak inspect it more closely so patrol officers can focus on their day-to-day responsibilities.

“It’s important to have detectives in a police department to conduct the more complicated follow-up,” said MUPD Chief Paul Mascari.

For example, when a burglary happens, the detectives show up, take fingerprints and photos and try to track down property.

The time frame varies for detective cases. Ball and Krystowiak work on immediate crimes but also cases that occurred several months ago.

The two detectives come from very different law enforcement backgrounds, but believe they are able to complement each other because of those differences.

“(Krystowiak) really knows the university operations, the university personnel that we work with regularly, and Detective Ball brings an amazing amount of experience,” Mascari said.

Krystowiak has been part of the Marquette community for almost 20 years. His time at Marquette began as a student in 1996. Near the end of his undergraduate career, Krystowiak worked in residence halls for public safety. After graduation, he became a public safety officer, mainly patrolling the streets during third shift. Several years later, Krystowiak was promoted to public safety investigator and named detective when MUPD formed.

Krystowiak said he originally wanted to become a police officer to help the community.

“Even before we were a police department, I really enjoyed helping out this community, so I decided to stick around,” Krystowiak said.

He added that he likes the mental challenge each unique case presents and loves the job because every day is something different.

Ball has 27 years of experience in law enforcement, including 20 years as a detective, mainly with MPD. His time with MPD included assisting in 2014 with the high-profile recovery of a 300-year-old Stradivarius violin valued around $6 million. The main reason Ball became a detective was because he likes “to see the story through,” beginning with the crime and ending with an arrest.

Ball accepted his retirement last year from MPD, then moved directly to MUPD.

“Having as much experience as I had in law enforcement, seeing Marquette becoming a brand new police department, I thought I had something that I could … help them to grow and become more of a viable police department in the community,” Ball said.

The detectives work close together and “bounce ideas off each other all the time,” Krystowiak said.

Mascari said he trusts the detectives to evenly divide the work evenly on their own.

“They do a really good job of coordinating and managing their workload between the two of them,” Mascari said.

Additionally, the two often work in accord with MPD on felony cases. Ball’s lengthy experience in the department benefits this positive working relationship.

Despite their different backgrounds and Krystowiak being a relatively new detective, Mascari said he is very pleased with Ball and Krystowiak’s work thus far.

“I think the two of them together make an excellent team,” Mascari said.