Aurora and Colorado State to represent Pacific Division at Nationals 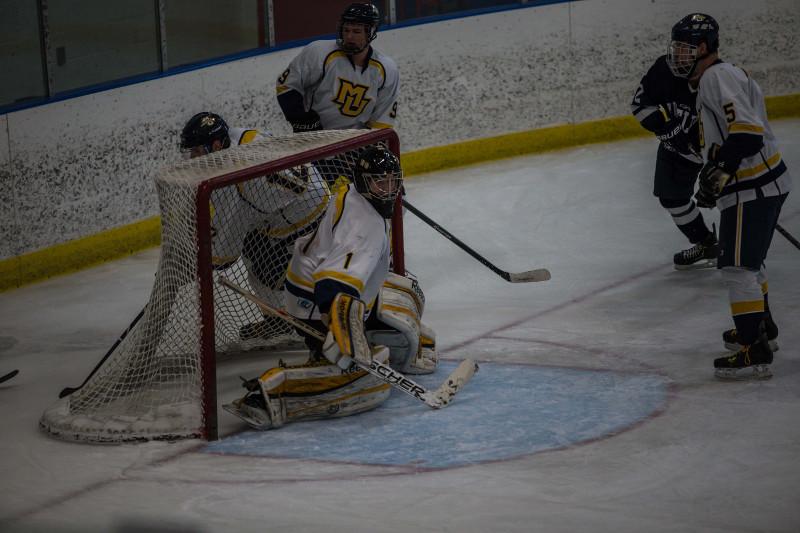 Goalie Robby Arner is one of the main building blocks for next season (Photo by Nolan Bollier/nolan.bollier@mu.edu)

One win. That’s all the Marquette hockey team needed to reach their goal of making the national tournament. Then, like getting blindsided by a truck, the McKendree Bearcats brought the Golden Eagles’ season to a dramatic halt.

“The wound is fresh,” head coach Will Jurgensen said.

In the second round of the American Collegiate Hockey Association Pacific Regional, the Bearcats jumped out to a massive 5-1 lead after the first period and didn’t look back. Marquette never gained an advantage in the remaining two periods, and the Golden Eagles fell 10-6. This marks the second consecutive year that the team was knocked out in  regional play, keeping Marquette out of the national tournament for the third straight year.

“We didn’t accomplish the goal (of making Nationals), but at the same time I’m really proud of the way the guys played all year long,” Jurgensen said.

The team finished with a 25-5-2 record, one of the top marks in the ACHA Division III Pacific Region. Marquette can also hang its hat on winning the Mid-American Collegiate Hockey Association’s Silver Division championship for a second year in a row. The Golden Eagles earned hard-fought wins against Loyola-Chicago, Aurora and a talented Iowa State team to claim the title.

“You cannot take away that winning the conference the past two years is a pretty big deal,” Jurgensen said. “We downplayed it this year because we wanted to focus on Regionals, and not settle on (the Silver Division win). But when you look back at the season, it’s a pretty cool thing to be able to repeat like that.”

In a peculiar year in the Pacific Region, Aurora (Illinois) dominated the regional tournament to clinch a Nationals berth, a slap in the face to Marquette considering it dominated Aurora in all three matchups this season. The Golden Eagles also defeated Colorado State this year, who earned the region’s automatic berth to Nationals.

“It was a good year overall, I don’t think there’s anything to keep your head down about,” Jurgensen said.

Jurgensen and his team have every right to remain optimistic. The team only loses four seniors, and retains two of its most important pieces for the future: sophomore goalkeeper Robby Arner and junior forward Johnny Stillman, the team’s leading goalscorer this year.

With so many returning players, it’s hard to imagine the team moving anywhere but forward. Not only is a third straight Silver Division crown certainly in the realm of possibilities, the elusive trip to Nationals will surely be a focus again.

“This is a good experience for the guys who will be back next season, and for the young guys especially,” Jurgensen said. “Once you get the feeling for it, next season they’ll want it even more.”