SCHILLING: Lessons from my stint with social media relevance 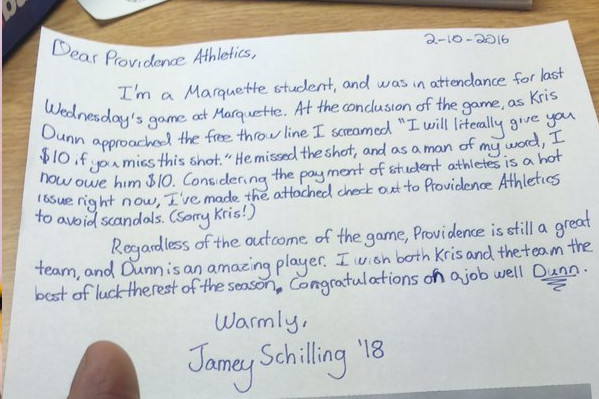 Schilling's tweet was retweeted over 1,000 times and was reposted by Sports Illustrated and USA Today (Photo by Jamey Schilling/andrew.schilling@mu.edu)

I’ve always been a proud heckler. Whether it was yelling at opposing players during football games in high school or yelling at the top of my lungs at a certain Providence guard, I’ve always enjoyed the idea that I have my own personal impact on the game.

But my most recent “heckle” got a little more attention than I expected. Here’s the short version of my brief stint of Internet relevance: On Feb. 10, Marquette’s men’s basketball team was in the midst of a back and forth battle with Providence. With under a minute left in the game, senior guard Kris Dunn was about to attempt two critical free throws that could have sealed a win for the Friars. As he prepared to shoot, I yelled “I will literally give you 10 dollars if you miss this shot” from my seat in the student section.

Dunn missed the shot, so I decided I had a commitment to keep. I promptly went home after the game and wrote a check for 10 dollars to send to Rhode Island the next day. I took a picture of the check as well and the letter I included with it, and like any attention-seeking millennial, I posted it on Twitter.

Initially, I thought the tweet would only reach a limited audience – friends, family, maybe a few strangers via retweets. Not in my wildest dreams did I expect it to receive more than 100 likes, but it did. It eventually climbed the ranks of 1,000-plus retweets and 1,500 favorites. Before I knew it, several online news sources including USA Today, Sports Illustrated and Sporting News had written articles about me, which all generated thousands more interactions. I was in disbelief; never did I expect such a roaring reaction.

While I enjoyed every minute of my sudden “fame,” I knew from the very start that my time in the spotlight was limited. Thus is the nature of social media – relevant today, old news tomorrow. Soon my life as a regular student would resume, and I was okay with that. That made everything all the more special to me.

This unique series of events allowed me to appreciate every moment of the excitement. At the same time though, my realization allowed me to keep my ego in check. I was after all, as Yahoo Sports described, just “an obnoxious voice in a crowd,” no different than any other loudmouthed college hoops fanatic. I wasn’t changing lives here. I was just a student who should’ve been studying, but elected to go to a basketball game instead and got into the moment.

About a week after the tweet had reached its peak, I found myself thinking a lot about a quote that I’d heard in a high school Theology class from deceased Archbishop Oscar Romero, who preached, “It helps, now and then, to step back and take a long view.”

After everything died down, I was able to finally step back and come to an interesting conclusion: life is best treated like a brief brush with social media relevance.

Much like sudden social recognition, life is extremely finite, but that doesn’t mean you shouldn’t enjoy and appreciate every day you have. It’s almost impossible to anticipate anything in life; don’t take for granted something you find special, no matter how big or small.

So whether it be lunch with a friend, a walk to class on a beautiful crisp winter day or even heckling at a sporting event, I urge you to appreciate every moment you’re presented with in this life. Unique moments have a tendency to act a lot like viral social media post; quickly becoming a thing of the past.