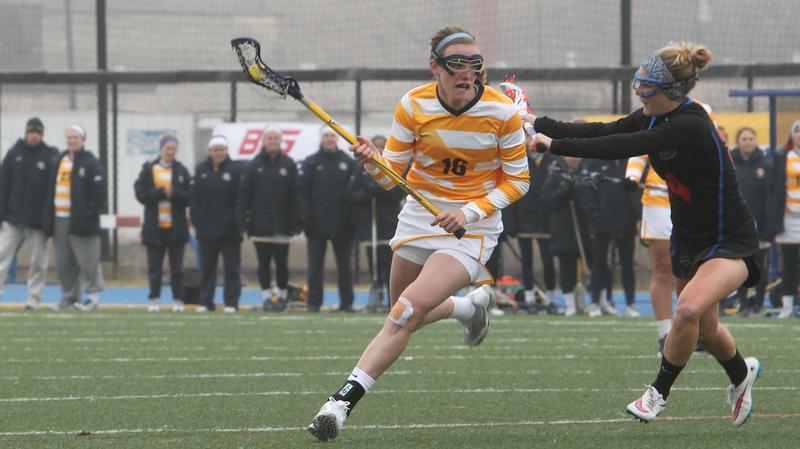 The women’s lacrosse team fell short to Michigan in Ann Arbor yesterday afternoon 11-8 for its third loss in a row to open the season.

Marquette trailed 6-4 at halftime but tied the game at seven with 18:57 left in the second half. The Wolverines answered with three straight goals to put the game away. Amanda Bochniak and Julianna Shearer led the Golden Eagles with two goals apiece. Both teams were even on shots (19-19) and ground balls (17-17).

Head Coach Meredith Black said the team had opportunities to win the game. She said the team’s 12 turnovers in the first half really hurt and killed any momentum they had. Despite the disappointing loss, Black believes the team is remaining positive and will build from the game.

“It’s the same story of our team being physically capable of playing any team in the country right now, and that’s really encouraging,” she said. “We know how to fight, we do great things, we just need to continue to do great things consistently for an entire game.”

One great thing Marquette did was winning at the face-off X for the first time this season, 11-10. Black said those positive moments in the game is what they need to focus on doing consistently.

“It’s not as easy as it sounds, there is a mentality and belief that we need to continue to grow,” Black said.

Black said the team feels no pressure to win right now and all roads are pointing toward BIG EAST play.

“The BIG EAST is going to be the season that determines a lot,” she said. “We have to keep building and walking up the mountain, not taking any steps back.”

Looking ahead, the Golden Eagles will have their first home games of the season this Friday and Sunday against California and Colorado, respectively. The Bears lost an OT thriller, 16-15, to Ohio State in their lone game this season, while the Buffalos are 2-0 to start.

“We’re excited to play at home,” Black said. “We’ve been on the road and had some crazy travels so it’s nice to be home for two games in a row and play on the field we practice on everyday.”