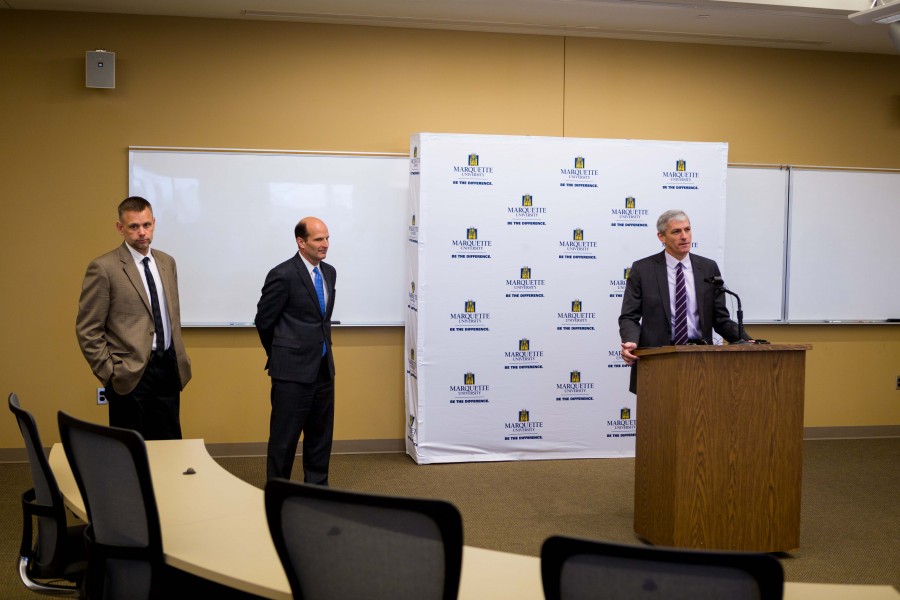 The first meeting of a Marquette-spearheaded national task force studying water security and supply issues was held at the law school today and attended by professionals from industries, government and academia.

The task force is part of a national initiative led by Marquette, A. O. Smith Corporation and the Council on Competitiveness. The product of this initiative, announced in November 2015, will advise the White House and Congress on water use in manufacturing. In turn, the work is expected to improve the competitiveness of U.S. manufacturing.

The main topics of today’s meeting were the role of infrastructure in delivery and storage of water for manufacturing operations, technologies to use as a response to water-related risk and to encourage efficient water use, the investments needed for manufactures to get water access, opportunities for businesses to collaborate with higher education and finding talent to help manufacturing survive.

University President Michael Lovell, A. O. Smith Chief Technology Officer Robert Heideman and the Council on Competitiveness Executive Vice President William Bates discussed what happened in the meeting. Heideman said he is excited and gratified by the work done so far but also emphasized that the process will take time.

Bates said the main recommendations discussed so far are the value of public-private partnerships and the need to involve stakeholders from as many different areas as possible so change can be made.

Bates said the goal is to bring enough professionals together to have an influential voice through political advising. He said there’s no way to know for sure if the future advisory report will be accepted.

“Many issues we’re talking about today are nonpartisan or bipartisan issues, and I do believe there is an appetite … to find some of those shared interests that we can work on together,” Bates said.

Lovell highlighted that there isn’t a single solution for what these issues discussed, rather a combination of different ideas.