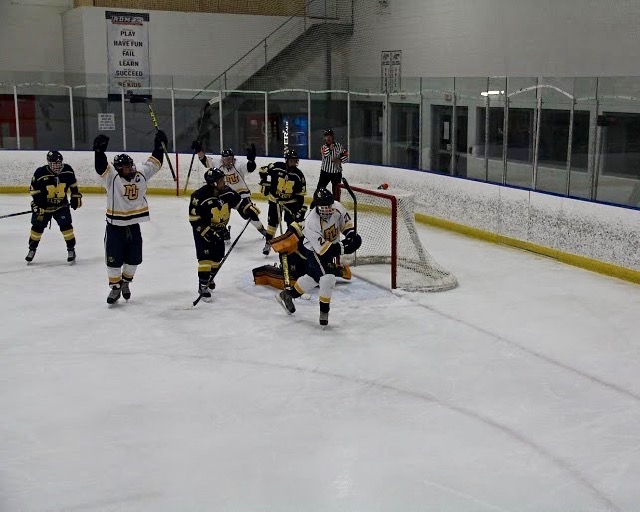 Marquette hockey found themselves hoisting up the Mid-American Collegiate Hockey Association’s (MACHA) Silver Division championship trophy for the second season in a row this weekend. The team went a perfect 3-0 during a grueling weekend which featured matchups with some of the best teams in the region.

“Last year we came in as maybe underdogs, but this year we were the team to be,” said head coach Will Jurgensen.

On Friday the team faced seventh-seeded Loyola (IL), a team they had already played two times this season. This game proved to be the hardest matchup yet for the Golden Eagles. The game was closely contested, and at one point the Ramblers came back from a 3-1 deficit. It was a high scoring affair, and Loyola scored a goal with 1:21 remaining to tie the game at 6 apiece in the third to force overtime.

Once overtime began, it wouldn’t take long for junior forward Johnny Stillman to end it. He tallied a score a mere 15 seconds into the extra period to send Marquette on to the next round with a final score of 7-6. Stillman had a great game and finished with 2 goals and an assist.

“I’ll let in six, but I draw the line at seven,” Arner said.

In the semi-final round, Marquette found themselves in a battle against Aurora University, another team they had played earlier in the season and beaten twice.

Stillman once again had a hot stick and scored under seven minutes into the game. He’d assist on the next goal which came from freshman forward Michael Desalvo later in the second. Stillman would finish with a hat trick in the 4-2 victory.

The team’s next game proved to be the hardest matchup of the weekend, a championship game tilt against the top-seeded Iowa State Cyclones.

The game was a defensive struggle between to talented teams. Like the Golden Eagles’ first round game, this matchup would also be decided in overtime. Iowa State scored early into the third period, but Stillman scored his sixth goal of the tournament, and perhaps his most important one, as he tied the game with 1:26 remaining in the third.

The game wouldn’t last long once overtime began, as junior forward Colin Telmanik scored the game winning goal just 26 seconds into overtime to give Marquette not only a win and a second straight Silver Division championship.

“They wanted it, you got guys on the team that wanted to win a championship, and worked hard all season long,” Jurgensen said. “They set a goal, and that’s what it comes down to.”

The player of the tournament for Marquette was Robby Arner. Although there wasn’t an official MVP, Jurgensen gave the championship game puck to Arner, who after allowing six in the first game, allowed three goals in the final two games.

“We only won it because of him,” Jurgensen said.

The team begins regional action this weekend in Lincoln, Nebraska, beginning their push for nationals against Arkansas.