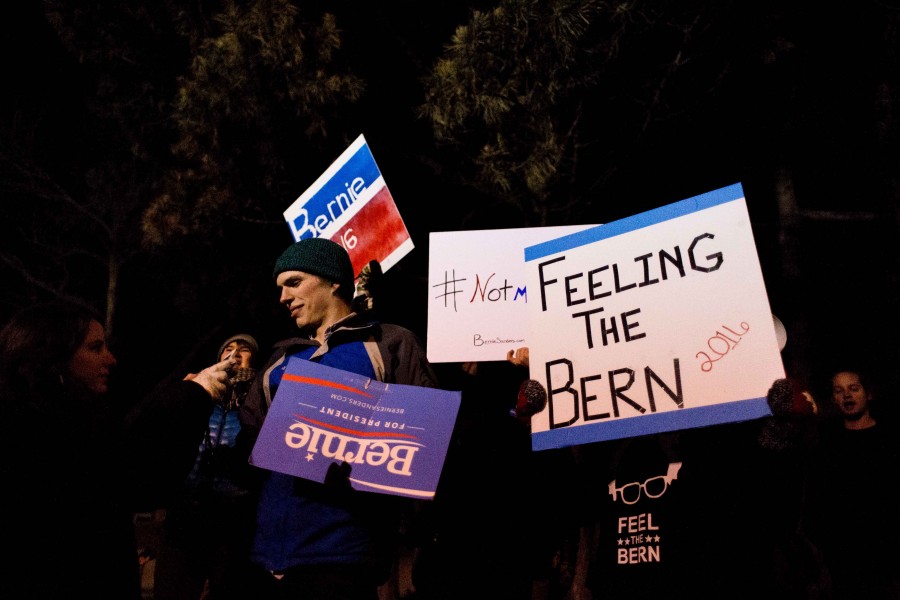 Protesters braved the cold and rallied for a higher minimum wage in Spaights Plaza at the University of Wisconsin-Milwaukee, home to the Feb. 11 Democratic Presidential Debate between candidates Bernie Sanders and Hillary Rodham Clinton.

Members of Youth Empowered in the Struggle Marquette, Students for a Democratic Society, the Milwaukee Anti-War Committee and Fight for 15 were among the protesters.

Fight for 15 is a movement that advocates for increasing the minimum wage to $15 an hour. Its members said they believe a higher minimum wage will help the affected employees better provide for their families.

“We see that (politicians) are not making all the promises they make when they go into office,” Sanchez said. “They’re not being truthful.”

Sanchez said he hopes the protest will make the candidates aware that more is expected of them if they win the presidency. He led the protesters in a series of chants in English and Spanish: “we’re people united; we’ll never be defeated.”

“We want to make sure our presence is clear,” Sanchez said. “We demand more from our politicians and candidates.”

Not all of the demonstrators were dissatisfied with the candidates. Many of them gathered to rally in support of them.

Hillary Laskonis, a junior in the College Arts & Sciences and chair of College Democrats, attended the debate, described the experience as “incredible” and said she could not determine a clear winner. She thinks the candidates could have better addressed minorities.

“Last night was the first debate you could see Sanders and Clinton appealing to minority voters,” Laskoni said. “I think both candidates should have explored issues that face people of color more in depth than they did.”

The protesters drew a large number of people and remained peaceful. An information representative at the UWM student union, Brandon Roberts, said the school did not feel the need to take any extra precautions.

“It has been this way before,” Roberts said. “There have never been any major interruptions before and I have never felt threatened.”