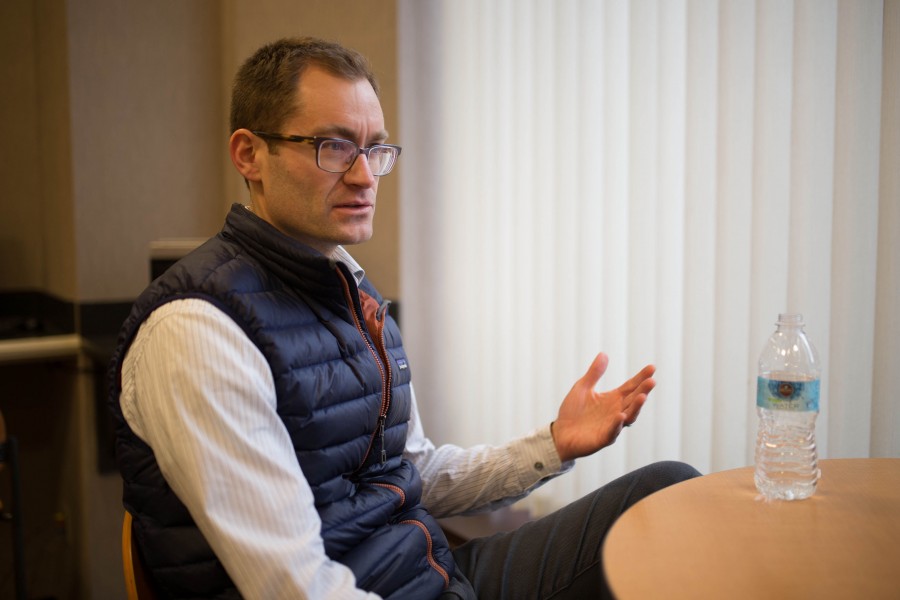 Being a student in 2016 means always being connected. Whether it’s between classes, eating in the dining hall or just lounging around, smart phones are constantly checked, notifications chased and miles of news feeds scrolled through.

Perhaps the most avid social media user on campus isn’t a student at all. Tim Cigelske, Marquette’s in-house Twitter expert, Snapchat early adapter and self-described Medium addict, has built a career on social media. For almost eight years, Cigelske, a Marquette alum, has been the director of social media for the Office of Marketing and Communication.

Under his authority, Marquette has been recognized for staying on the cutting edge of technology. Cigelske said Marquette earned a spot on the Top Ten Most Influential College Twitter accounts about seven years ago. This summer HubSpot Blogs named Marquette one of the 13 best Facebook pages in higher education.

“I think we’ve had a reputation of being on the cutting edge, and that’s something I don’t want to lose,” Cigelske said. “I jump into things even earlier than what may be prudent just so we can be there and explore it.”

Scott D’Urso, department chair of communications studies and associate professor in the College of Communication, similarly jumped onto the social media bandwagon early. He witnessed firsthand how sites like Facebook and Twitter have shaped students lives — and how student’s in turn have shaped them.

“In 2004 and 2005, when Facebook was just getting started, students treated it almost like a bulletin board in a dorm,” D’Urso said. “‘Here are some pictures, here’s whats going on, here are some parties.’ There really wasn’t a definitive purpose for using it. Most people were using it for fun.”

Of course, users soon became aware that anything they post can impact their personal and professional lives. Public posts have the ability to impact future employment opportunities and even current friendships. Nick Malik, a freshman in the College of Communication, said he is conscious about the content he posts on social media.

“If I want to write a tweet or post something on Instagram, I always think for a little bit before I post it — about my caption, if the picture’s appropriate or if the tweet will give me a bad image,” Malik said. “I think most kids are conscious, but then there are some kids who literally Tweet 50 times a day about everything they’re doing and don’t put much thought into how that impacts them or if what they’re saying even really matters.”

Cigelske and D’Urso recommend that students harness social media to advance their careers, rather than fleeing in fear of how it may hurt them.

“I think a lot of people worry about keeping it real at age 20 and not being too professional (on social media),” Cigelske said.

Cigelske said students can use Snapchat to talk to friends or a private Instagram account, but also have a blog portfolio or a Medium account that they keep professional. He reminds students that they don’t have to be a writer to keep a blog or Medium account. For example, he said engineers can use blogs to post pictures of their projects and show off work from capstone classes.

“The medium doesn’t matter a whole lot,” Cigelske said. “It matters what you like and what you’re good at. For instance, if you like writing then write. Go to Medium or WordPress or whatever blog site is around in five years. If you like photography, go to Instagram or Pinterest.”

Though his career is built on social media and connectedness, shutting down the constant barrage of notifications might just be Cigelske’s biggest message of all.