MU to play tune-up before regionals 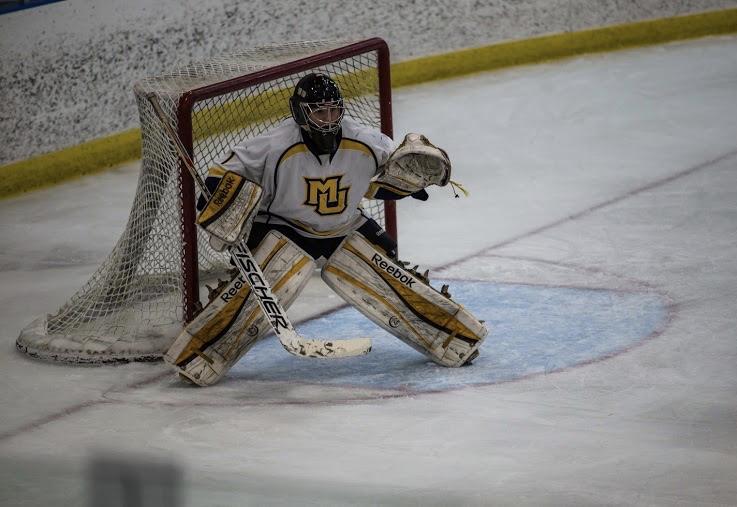 When the clock hit zero Saturday afternoon at the Ponds of Brookfield, the Marquette hockey team’s impressive regular season came to a close. At 21-4-2, the team finished third in the crowded American Collegiate Hockey Association Pacific Region and will have to play into the national tournament.

Marquette needs to earn a ticket to the ACHA National Tournament in March by winning two straight games in the regional bracket, which takes place in Lincoln, Nebraska Feb. 19-20. The seeding for the tournament, which is based on rank instead of standing, will be released this weekend. Marquette is projected as the No. 3 seed in the region behind Metropolitan State University of Denver and Colorado State, who would both earn automatic berths to nationals as the top two seeds.

Before regionals, the Golden Eagles will play in a pre-tournament of sorts. The Mid-America Collegiate Hockey Association Silver Division playoffs provide a final test for teams on the cusp of making ACHA Nationals. After winning the eight-team tournament last year, Marquette is the No. 2 seed in this weekend’s bracket.

Iowa State, who finished the season on a 10-game win streak to lead the Pacific division in wins with 23, is the No. 1 seed. The Cyclones present Marquette’s biggest roadblock for repeating as champions. They averaged 5.5 goals and allowed only 1.9 goals per game. The teams did not meet in the regular season.

“No matter who we play, we have to take them seriously, whether we’ve played them before or not,” head coach Will Jurgensen said.

The Golden Eagles will face No. 7 Loyola-Chicago in the first round, who Marquette swept in a two-game series two weeks ago. The first game was a dominant 11-2 victory, but the second game proved to be a much greater challenge. The team was forced to comeback from a 5-2 deficit in the third period before junior forward Chris Dolan sealed the 6-5 win with 2:13 left in the game.

“That was regular season, and this is the playoffs,” Jurgensen said. “There’s a trophy on the line, and at the end of the day you can’t take any team lightly … whether they’re a high seed or a low seed, they can beat you.”

The Golden Eagles have a statistical advantage on both ends of the ice. They’ve scored 165 goals this season, a massive margin above Loyola’s 99 goals scored. Marquette’s defense has allowed 2.8 goals per game, which is also superior to a Ramblers unit that has conceded 3.5 per game.

“The team is playing with a lot of confidence right now,” junior forward Johnny Stillman said.

Stillman will face off against the Ramblers’ Dominic Marcus, the team’s leading scorer with 15 goals and 11 assists on the season. Marcus will have to outshoot Stillman, Marquette’s leading goal scorer, in order to give the Ramblers a chance in this game. Stillman has 20 goals and 14 assists on the season for a team ranked third in the Pacific Region in overall goals scored.

Despite Marquette’s offensive prowess, Jurgensen believes sophomore goaltender Robby Arner, who is tied for the Division III Pacific lead in wins with 21, will be the team’s key to success.

“You have to have good goaltending in the playoffs. You catch a hot goaltender, and you can go places,” Jurgensen said. “He’s played well for us all year, and I anticipate that he’ll continue to do so.”

Arner will depend on the rest of his team to keep up its formula in front of him: Score goals and keep penalties to a minimum. The team struggled with on-ice discipline early in the season but now rank ninth in the Pacific Region in fewest amount of penalty minutes.

“Our discipline has gotten a lot better,” Jurgensen said. “This semester, for the most part, the guys have really tried to stay out of the box, and it helps,”

One aspect of the game the team will need to work on is turnovers. Although there’s no official statistic kept, it has been an apparent problem in recent games, including this past weekend’s home series against Butler.

“A lot of the times (turnovers are) happening right as we’re trying to bring the puck out,” Jurgensen said. “We just have to tighten up in the defensive zone and make sure all the guys come up together.”

If Marquette beats Loyola, it will face the winner of No. 3 Aurora versus No. 6 Bradley. Marquette swept Aurora and split the series with Bradley in the regular season.

The Golden Eagles have had a successful season, but nobody plays for a regular season trophy. The road to nationals will be challenging, even if it’s only a matter of a few games. The fresh start of a “new” season begins Friday with the MACHA playoffs before regionals.

“We have to come out and be ready to go, because three wins and we hoist a trophy,”Jurgensen said. “It’s just making sure we’re starting over and battling for 60 minutes.”