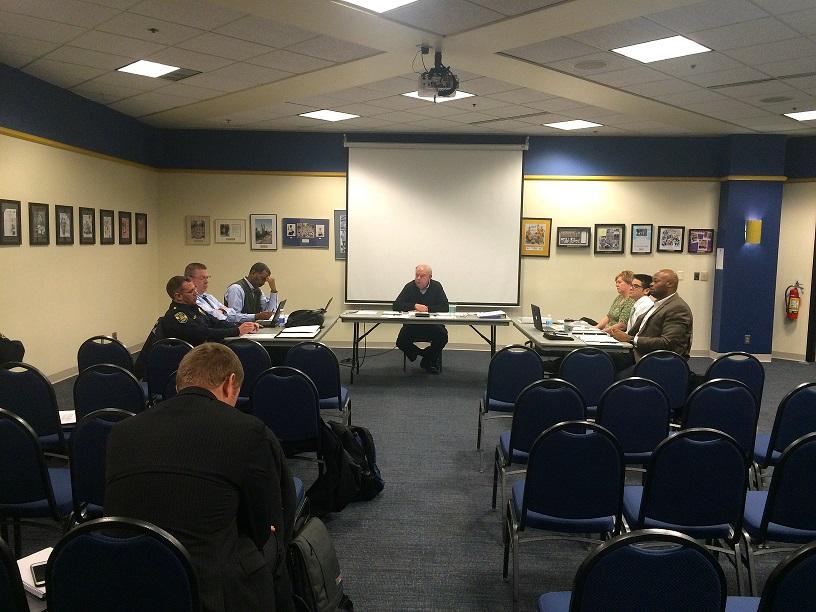 The MUPD Advisory Board. Photo by Brittany Carloni/brittany.carloni@marquette.edu

The Marquette Police Department discussed implementing pilot phases of tasers and body cameras during its Advisory Board meeting Feb. 9.

The board unanimously ​endorsed Marquette’s decision to equip MUPD with tasers in the future. Additionally, the board recommended MUPD adhere to the taser policies and procedure manual discussed during the meeting.

MUPD Captain Jeff Kranz will lead two separate taser user certification sessions for all 40 MUPD officers. They will be Feb. 11 and Feb. 13 from 8 a.m. to 4 p.m in the MUPD offices.

Kranz discussed what will be taught at the sessions, including how and when to use tasers and de-escalation tactics.

Tasers will “basically (be) there to avoid the use of deadly force,” Kranz said.

Kranz said tasers should only be used as a last resort, such as when someone presents an active threat toward an officer or another person nearby. He mentioned instances when tasers should not be used, including when someone is passively resisting arrest or fleeing from an officer.

Kranz also said MUPD will track deterrent effects of tasers, such as when an officer notifies a suspect they are carrying a taser and the suspect backs down.

“It’s kind of the ‘victory is in the battle not fought’ mentality,” Kranz said.

A two-year taser pilot program will be implemented within the next few months. During that time, MUPD will have four tasers at its offices. The tasers will be distributed, as MUPD sees fit, to officers when they start a patrol shift.

MUPD Chief Paul Mascari met with Marquette IT Services to discuss the technical side of body cameras, such as storage logistics. He said they are in the process of finding a project manager for body cameras, and that the due diligence required with this project makes it difficult to have a definitive timetable.

Mascari said body cameras will hopefully be implemented in a trial phase by the end of this month. The trial phase will at lease last until summer, giving MUPD an idea of how much data is gathered by an average summer patrol shift. MUPD can then compare the summer data to the spring semester data.

The board also brought up the issue of LIMO education. Mascari said MUPD focuses on educating students about LIMO services but sometimes overlooks informing faculty and staff.

“That’s an area where, quite frankly, we could be doing a better job,” Mascari said. He said MUPD will look into better ways of training faculty and staff in this regard.

During the meeting, more details emerged from the attempted robbery and shooting incident that took place Feb. 6 on 20th St.

Kranz said the two victims, who are not affiliated with Marquette, were walking back from the The Rave on 24th St. and Wisconsin Ave. One victim suffered a non-critical gunshot graze, while the other victim was not physically harmed.

The board also discussed MUPD’s policy on use of deadly force, which follows the curriculum put forth by the Wisconsin Department of Justice.

Mascari, who has been part of MUPD, formerly the Department of Public Safety, for about 12 years, mentioned that a DPS/MUPD officer has never used deadly force during that time.

The next Advisory Board meeting is scheduled for Tuesday, April 5, from 3:30 to 5:30 p.m. at the Raynor Library Conference Center.