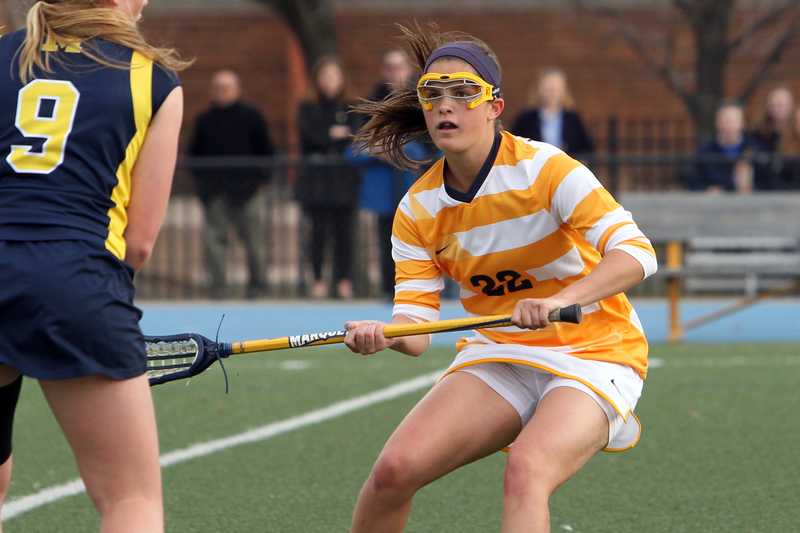 For the first time in Marquette women’s lacrosse history, 13 seniors will start their fourth year on the team when the season begins Saturday at Louisville.

Not knowing what to expect when they arrived on campus freshman year, the 13 women have come a long way since the team’s inaugural season in 2013, when the Golden Eagles went 2-15.

“We used to get killed by everybody the first year,” senior midfielder Hayley Baas said. “But now we are competing with these teams and beating some of the teams that beat us in years past.”

The seniors remember the tough times of not having older role models to look up to. Emma Salter, a senior goalie, said they try to help the freshmen and sophomores in any way possible.

“We didn’t have people to talk to, someone who understood what they’re going through now,” Salter said. “So we try to help (the underclassmen) in everything from academics to the weight room and on the field.”

Allison Lane, a sophomore midfielder, said as a freshman the current senior class helped her feel welcomed and comfortable.

“They are such a strong class,” Lane said. “Their individuality is amazing. It makes the team feel like a family.”

Now that the program has established itself, the seniors have noted the rise in confidence around the clubhouse.

“Back then, we couldn’t really catch a ball without being nervous about it,” Salter said. “Confidence and experience has had a really big impact on where we are today.”

The team hopes to carry that confidence into the regular season. Kenzie Brown, a senior midfielder and attacker, said for the first time the Golden Eagles collectively has no doubt it will be a tough obstacle for opposing teams.

“This year it’s going to be different,” Brown said. “We know we can match up with the competition now, it used to be just a learning experience every game but now we’re finally here to compete.”

Baas said the team’s success this year will depend on its mentality and that it’s the seniors’ jobs to set the tone.

“We want to show the underclassmen the work ethic it takes to win,” she said. “If they believe they can do it, we have the tools and ability to do what we want to do.”

Nicole Lankford, a senior midfielder and attacker, said it has been great to see the growth of the team since her freshman year. She wants the senior class to leave on a high note.

“Our senior class is a very unique and special group,” Lankford said. “I think this year we are very committed to making this year a great one.”

“When we came in we leaned a lot on coaches and depended on them to show us what to do,” Haverstick said. “Now as we grow up we know how things work, and we really learned a lot about ourselves. I think this year it will be amazing to see us connect on the field, to win more games and make the BIG EAST tournament.”