Men’s lacrosse heads to Ann Arbor for pair of scrimmages

Byrnes moves to defense, Danaher gets start in goal 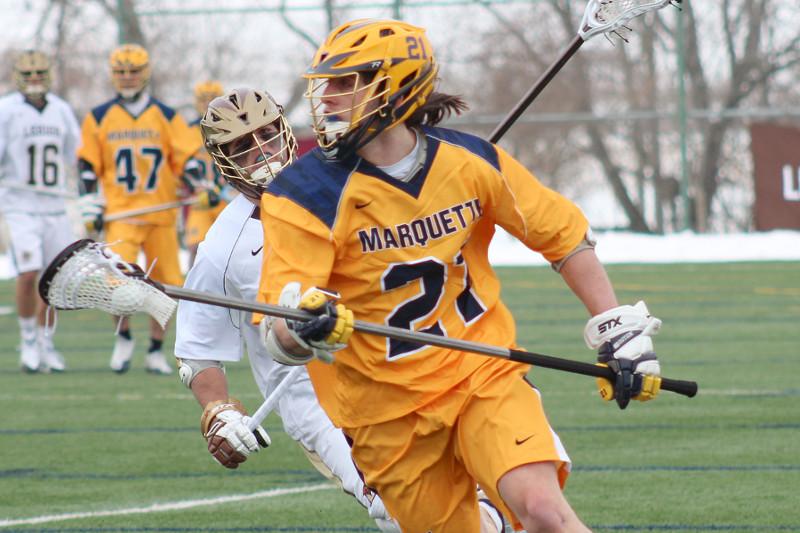 Men’s lacrosse will be in action for the first time in 2016 this weekend. The Golden Eagles travel to Ann Arbor, Michigan, to play Michigan and Denison Saturday in the team’s first of three preseason scrimmages.

Marquette will play a full four-quarter scrimmage with Michigan, while Denison will likely only be about two and a half quarters, Marquette head coach Joe Amplo said. This is the first game action for Marquette since the team’s lone fall-ball game against the Fairfield Stags.

“It’s always about execution this time of year,” Amplo said. “This team has got to start to develop that winning personality. Winning is always an objective. It’s not as much of an objective this weekend, but I want to see how important it is for these guys.”

The goal of this scrimmage is the same as at Fairfield – test where the team is at and figure out a few key position battles. Marquette plans to use much of its roster, but the starters will play a majority of the games.

The two main open positions of note are lefty attackman and a starting defenseman, left vacant after the graduations of Jordan Greenfield and Logan Tousaw.

The attack battle is slightly put on hold, as two of the favorites, junior Joe Dunn, who scored three goals in the Fairfield game, and junior Kyran Clarke, are both out with injuries.

These injuries present opportunities for freshman John Wagner, junior Grant Preisler and freshman Scott McNamara, moved from his traditional midfield spot, who will all get a chance to prove themselves.

“This time of year, it’s great,” Amplo said. “It forces us to look even further at the guys that are a little bit lower on the depth chart. For them it’s a great opportunity.”

Graduate student Liam Byrnes, who has spent a majority of his Marquette career at long-stick midfielder, has been moved down to close defense, alongside graduate student B.J. Grill and redshirt senior Dan Mojica.

“It’s still early, so I’m hoping that at least the effort is there,” Byrnes said. “The execution will come.”

Sophomore Matt Lanza is another player that could work his way into the defensive rotation. The 5-foot-10 defender played in five games last season, snagging one ground ball.

“I’ve been really impressed with Matt Lanza’s play so far,” Grill said. “He’s really stepped up and I think he’s going to make a really big impact for our team.”

“If they play well, that will allow us to keep Liam down at close defense a little bit more than we had thought,” Amplo said.

Amplo said goalie duties will be split for the scrimmage against the Wolverines, with Jimmy Danaher starting the first half and Cole Blazer playing the second.

Marquette has played Michigan in a preseason scrimmage in each of its four seasons of play. The Golden Eagles won last year’s game 11-9.

Denison is ranked No. 17 in Inside Lacrosse’s Division III preseason poll. The Big Red were 13-4 last season.

Face-off for the first scrimmage is set for noon. The timing of the Denison scrimmage is a bit up in the air. The Golden Eagles will travel each of the next two weekends, playing High Point next week and Cornell in Philadelphia Feb. 13.