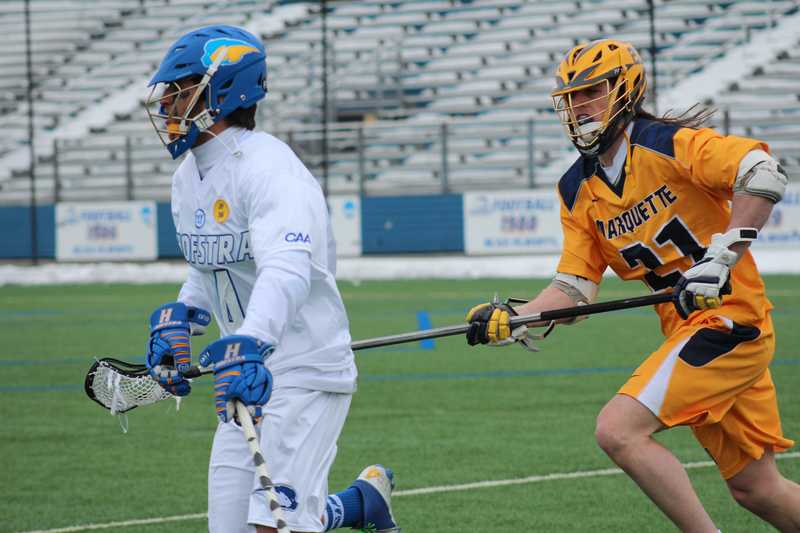 The 2016 Major League Lacrosse Draft was a historic one for Marquette. Not only did the program get its first MLL draft pick, but had two more selected as well. Long-stick midfielder Liam Byrnes, midfielder Jacob Richard and defenseman B.J. Grill’s names were all called at the podium in Baltimore Friday afternoon.

One round later, Marquette’s second player came off the board. Richard was taken by the New York Lizards, the defending league champions, with the 35th overall pick.

Grill came off the board with the 40th pick, heading to the Denver Outlaws.

Brynes, a graduate student and team captain, is the program’s all-time leader in loose balls (158) and forced turnovers (69). He was named a Preseason Third-Team All-American by Inside Lacrosse last month. He has twice been a member of the All-BIG EAST team, including first-team honors last season. He was also the second player from the BIG EAST selected in the draft. Denver’s Colin Woolford went a pick earlier to the Charlotte Hounds.

Last year Byrnes had four goals and two assists in 16 games, getting one start. He picked up 52 loose balls and forced 26 turnovers, both team highs.

His start came on defense against Ohio State, when he was given the difficult assignment of 2015 MLL first-round pick Jesse King. Byrnes shut King down, only allowing him to score one goal, and added a goal himself in the game.

Richard started all 16 games last season in a defensive midfielder role. He scored four goals and had three assists.

Grill has started 44 games in his three-year career and usually draws the top defensive assignment in games. He grabbed eight loose balls and forced 11 turnovers in 16 games last season.

Drafted players enter the league following the conclusion of their collegiate seasons, which depends on how far a team goes in the NCAA tournament. If the Golden Eagles fail to make postseason play, the trio would miss the first two to three weeks of the MLL season.

Marquette will play three of the first five selections in the draft — Duke’s Myles Jones and Notre Dame’s Matt Landis and Matt Kavanagh – during the 2016 season.