Team needs sweep and help to move into second place 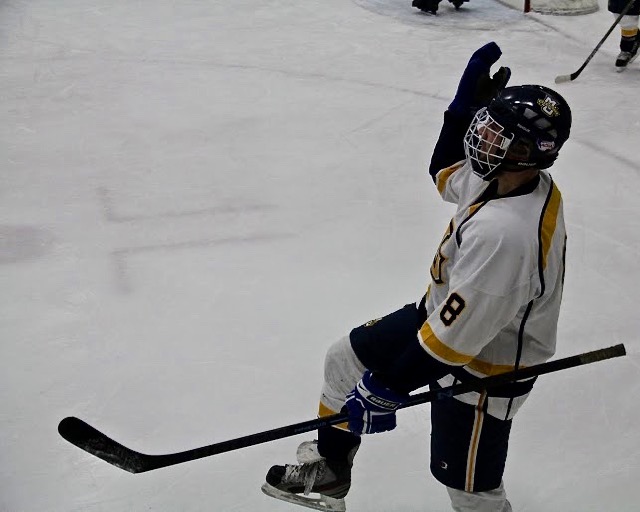 With just six regular season games left for the Marquette club hockey team, they’re in a great position to qualify for the national tournament this March. At 16-4, the Golden Eagles are tied for third in the Pacific region of the American Collegiate Hockey Association.

“It’s go time,” head coach Will Jurgensen said. “We’ve put ourselves in a really good spot after the first part of the season. We’ve won a lot of really good games. It really put us in a position to accomplish something in the playoffs. Now it’s time to pick up on that. ”

The top two teams in the league earn automatic bids to the national tournament in Grand Rapids, Michigan. The remaining teams ranked third through 10th must battle each other until only two remain.

Marquette, a team that has already spent time in the top two of the rankings earlier this year, still controls its destiny.

“We can’t take any games off because if you do, it’s going to hurt you,” Jurgensen said.

The top two teams in the region, Metro State and Colorado State play each other twice this weekend. If Marquette can win both its games against Bradley, and CSU wins both of its games, Marquette will find itself in sole possession of second place. A split between the two schools would create a tie between Marquette and Metro State.

Marquette has six remaining games (two each against Bradley, Butler and Loyola-Chicago) while CSU and Metro State only have five. This double-edged sword leaves opportunity for positive impact to their rank, but also the possibility for harm should they lose.

This weekend, Marquette looks to pick up another two wins as they travel to play Bradley. The Braves are tied with Marquette for third in the region at 33 points, making this a critical matchup for both teams.

Marquette will need to continue their strong offensive outputs and not put too much pressure on sophomore goalkeeper Robby Arner who’s saving 72.1 percent of shots and allowing 2.88 goals per game.

Statistically, Marquette has been the better team on both ends. Marquette is fifth in the Pacific region in goals scored (124) and averages an impressive 5.9 goals per game, compared to Bradley who averages 4.5. This will be an important aspect of the game against a Bradley team that allows 3.5 goals per game. In a game of two relatively high scoring teams, the team that finds the upper hand offensively will prevail.

The depth of Marquette’s team will be in their favor, especially offensively. All six of the forwards on the first two lines have scored at least eight goals this season. The first line has been particularly lethal, featuring sophomore Brian Kennedy, who leads the team with 15 goals. With this depth, Marquette has the ability to wear down opposing defenses.

“This is one of the deepest teams I’ve ever been a part of in terms of being able to get production from all four lines as well as the bench,” Jurgensen said. “(They) play strong, play consistent and for the team.”