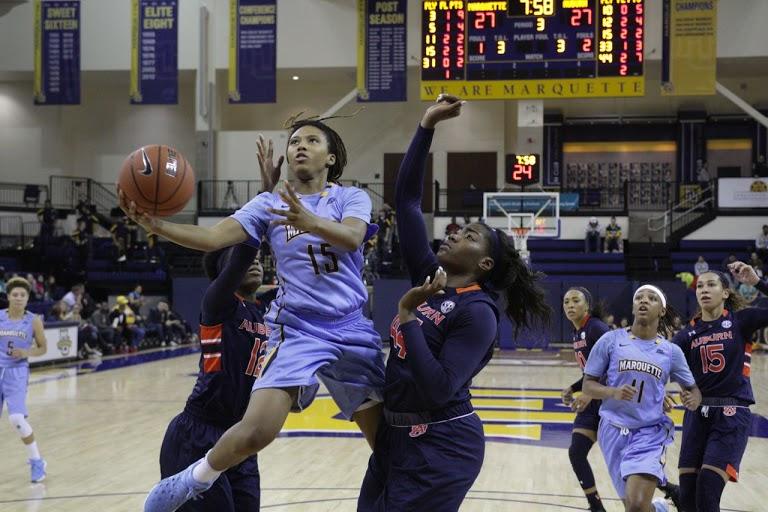 Yes, the Golden Eagles picked up their first conference victory. More importantly, though, Marquette elevated its level of play in a close game, which is not something this year’s young squad has done frequently. Coming into Sunday, Marquette was only 1-7 in games decided by 10 or fewer points, and the score of the Georgetown game was within that range for most of the game. However, Marquette emphatically bucked that trend against the Hoyas, outscoring them 35-16 in the final quarter en route to the win.

“We said at halftime that we were flat and everybody needed to pick each other up,” head coach Carolyn Kieger said. “We needed to do it by committee and it was going to happen on the defensive end, and they did exactly what we talked about.”

“Flat” is probably the best way to describe Marquette’s first half performance. The Golden Eagles shot only 25 percent from the field and their vaunted trio of freshman guards – Allazia Blockton, Natisha Hiedeman, and Amani Wilborn – combined to shoot 3-for-16. Marquette did play better on defense than it had in previous conference contests, but nowhere near well enough to compensate for its porous offense. Georgetown went on a 14-4 run in the first quarter to take an 18-10 lead into the second quarter, and was able to grow its lead to as much as 18 before Marquette battled back to make the deficit only 38-26 at halftime.

Desperate for a spark, Marquette turned to a familiar tactic to open the second half: the full-court press. The Golden Eagles pressed after almost every made basket from the start of the third quarter onward, and it resulted in nine Georgetown turnovers. Even when the Hoyas broke the press, it often took them at least six or seven seconds and multiple passes, which hampered their ability to run their offense in system. Georgetown went from shooting 42 percent in the first half to just over 30 percent in the latter half.

“We needed to get ourselves going, and our press gets us going,” Kieger said. “It makes us have more energy, talk more, and then obviously lets us score in transition and get that tempo playing fast, which is what we want.”

The third quarter was mostly back and forth as Marquette got to within two points of the lead before Georgetown re-asserted themselves on defense and stretched their lead back out to 10 with a minute left to go. However, back-to-back threes from Hiedeman and junior guard McKayla Yentz put Marquette back within striking distance to begin the final quarter.

Those three-pointers were the precursor to arguably the best quarter of basketball Marquette has played all season long. The Golden Eagles scrapped their way back for roughly half the quarter and took the lead on a layup from freshman forward Erika Davenport with 5:37 left. Then, the floodgates opened and out poured a sudden flurry of offense. Marquette went six of six from the field for the rest of the game and six of six from the free throw line to turn a tenuous two point lead into a comfortable 15 point victory in a matter of five minutes.

Yentz was the primary architect of Marquette’s closing outburst. She scored 11 of her career-high 24 points in the final quarter of the game, including three straight three pointers down the stretch to tie it. The Sun Prairie, Wisconsin native also grabbed five rebounds and got three steals to round out her stat sheet.

“Honestly, I wasn’t thinking too much about offense,” Yentz confessed after the game. “I was thinking about our team getting stops on defense and most of my shots came out of transition from my teammates…as they get deep in the lane I just (came) right behind them and knocked it down, so I’m glad I was able to do that for them.”

Despite Yentz’s career day, Marquette’s scoring leader was the same as usual: the freshman phenom Blockton. She dropped in 25 points for her third straight 20-plus point performance and her seventh game with more than 20 points this season. Blockton only went 6-for-14 from the field, but she flashed her ability to attack the basket, getting to the foul line an astounding 17 times. She also snagged seven rebounds and dished a team-high six assists.

Three other Golden Eagles scored in double figures: Hiedeman and Davenport both had 13 points while Wilborn put up 10 points. Five different Golden Eagles also reeled in at least five rebounds, with Davenport’s eight rebounds serving as the team high. Marquette has some work to do on the boards, though; the Hoyas out-rebounded them 49-35.

Marquette will be able to take a relatively long break before they hit the road again next week to take on Xavier Friday and Butler Sunday.