The Rave hosted 3oh!3, American Authors, and All Time on Saturday 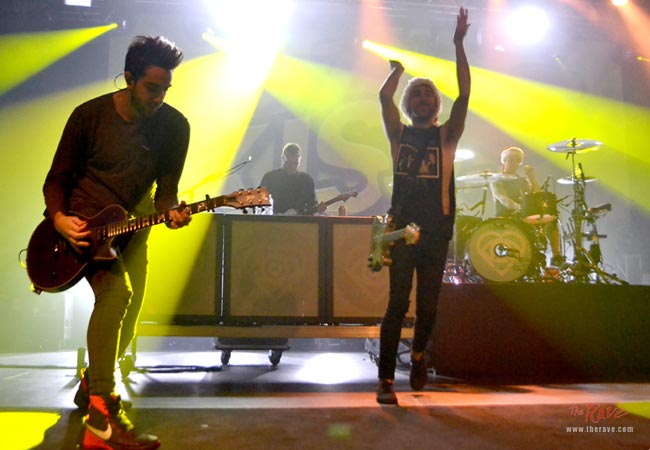 The Christmas spirit was in the air at the Rave this past Saturday. Wreaths and lights hung around the stage to help create some holiday spirit for 103.7 KISS FM’s Kissmas Bash. The audience was packed full of people, ready for the night to begin. 3OH!3 opened the event. They pumped up the audience with their high energy and upbeat tunes. They sang songs from all their different albums including hits like “Streets of Gold,” “Don’t Dance” and “Don’t Trust Me.” 3oh!3 danced and jumped around all over the stage to get the audience excited about the whole night of music. They started off the show right, leaving the audience ready and anticipating for the rest of the show.

Brooklyn natives, American Authors, took the stage next with their pop-rock tunes. The lights fit their name well and filled the stage with red, white and blue. Right from the start, they were full of energy, and they tried to get the audience to dance, sing and enjoy themselves. The band sang quite a few songs from their debut album, “Oh, What a Life,” like their big hits, “Best Day of my Life” and “Believer.” However, they also treated the audience to some covers of hit songs like “Can’t Feel my Face” and “Shut Up and Dance,” which were huge crowd pleasers. The band also informed the audience about the new release of their second album coming out soon, so they got the crowd excited for it by teasing some of their new songs like “Pride” and “Nothing Better.” American Authors played their finals notes, and then the audience was ready for All Time Low to soon hit the stage.

The audience chanted All Time Low in hopes for them to hit the stage as soon as possible. Soon the lights dimmed, and “Carol of the Bells” started playing to help introduce the main event. All Time Low finally came out and they really embraced the Christmas spirit by wearing Santa hats and opening with the Wham! Classic “Last Christmas.” The lights added to the holiday feel by lighting the stage with reds and greens. All Time Low’s stage presence and performance blew the rest of the bands out of the water. They danced and moved all over the stage radiating their energy and fun, making it easy for the audience to want to rock out and have a blast. They were super interactive with the audience by talking to them and gesturing to them, giving them a more intimate concert feel in the huge Eagles Ballroom. They sang songs from all of their eras, giving the audience a taste of how their music has sounded over the years. They sang songs like “Lost in the Stereo,” “Weightless” and “Missing You.” After killing it on the stage, they left and making the audience beg them to have an encore. They came back out to jam one last time with their song, “Dear Maria, Count Me In.” They surprised the audience with inflatable snow balls and confetti to close out the show strong. They have performed at the Rave twice a year for the past seven years, so they finished off the year of 2015 here and absolutely nailed it. Kissmas Bash let the audience finish off their year of music strong with this last rockin’ concert.​