Panic! At The Disco ends the Big Snow Show with a bang

The final night of the Big Snow Show featured Jr. Jr., Frank Turner, Atlas Genius, and Panic! At The Disco 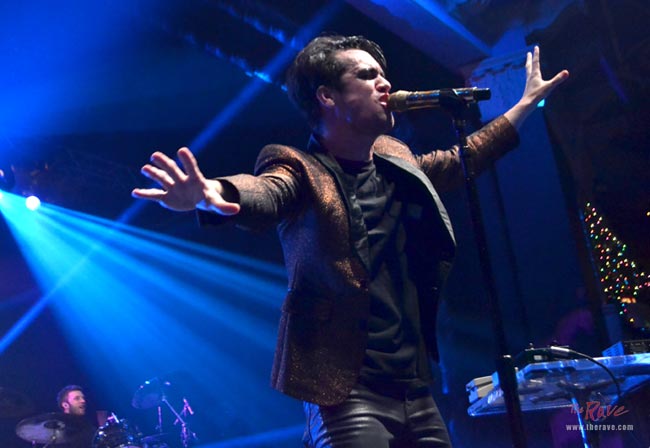 Panic! At The Disco. Photo via: therave.com

The Rave/Eagles Club wrapped up FM 102.1’s 10th annual Big Snow Show this past Saturday, continuing the momentum built up by the earlier performances. With a line stretching around and far from the building, fans camped out all afternoon waiting to see the four act lineup. The indie-pop band Jr. Jr. kicked off the night. They were fun and the music was great to dance to, but they did not quite have the energy and excitement of the previous acts. Their many of their songs blended together as well. However, the band ended their set on a strong note with “Gone,” which was definitely a highlight of their performance.

The next act was Frank Turner, who I had the pleasure of speaking with earlier that day, and his backing band, the Sleeping Souls. The folk-punk aesthetic of their show was established from the minute they walked on stage. Each band member walked out looking like a classy, well-dressed folk musician, with Turner sporting fully tattooed arms and a skinny tie.

They exploded into a roller coaster of five fast-paced songs in a row before he even started talking to the audience. Turner had the best personality and stage presence of any of the opening musicians that night. Highlights of the set include the beautiful mandolin, featured in songs like “The Way I Tend to Be,” the anthemic rock n’ roll vibe of songs like “I Still Believe,” and my personal favorite “Recovery.”

The excitement and anticipation in the crowd was palpable by the time Atlas Genius took the stage. I will admit that I was a bit worried at first during their rather underwhelming opening song. After seeing them at this past Summerfest and hearing their new album, I was expecting a great show. It took them only a few minutes dispel any worries and prove that they are great performers. They kept talking and interacting with the audience to a minimum, making the show all about the music. Their set was mainly songs from their new album “Inanimate Objects,” but they played their share of songs from their first album, including the crowd pleasing hits “If So” and “Trojans.”

Finally, Panic! At the Disco made an explosive entrance with “Vegas Lights” and “Time to Dance.” A new and an old song, neither of which were singles, but the crowd still knew every word and sang along. The set continued the high energy with all the new songs like “Hallelujah” and “Victorious,” but also old familiar ones like “Nine in the Afternoon” and “The Ballad of Mona Lisa.” Brendon Urie’s impressive vocal power and range was match with spectacular lights and stage effects. He warned the audience that he was sick, but his singing did not reflect that at al. The only problem I could find with the show was that too often the enthusiastic singing of the crowd would drown out Urie’s voice, especially when they covered Queen’s “Bohemian Rhapsody.” The climax of the show was when Urie honored his musical idol, Frank Sinatra, who turned 100 that day, by singing the last verse of his song “My Way” and then immediately transitioning to the pop-punk staple “I Write Sins Not Tragedies.” As the band took their bows, the crowd went crazy, bringing a fitting end to the three-night event.​