Marquette to face biggest test yet against rival Wisconsin 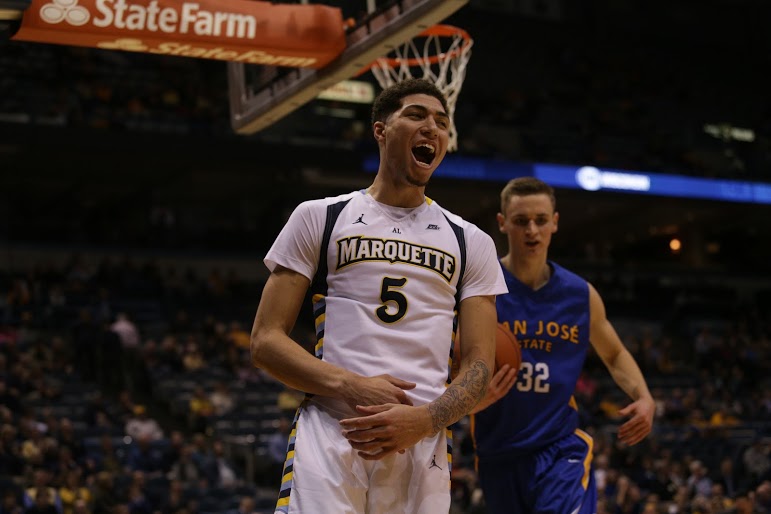 The Marquette men’s basketball team’s run of playing cupcake teams will be interrupted  Saturday for one of the biggest moments of the season. It’s a game that could be telling in whether the team will head to the big dance for the first time under Steve Wojciechowski.

Wisconsin, who was ranked in the Associated Press Top 25 at the beginning of the season, has had a bumpy few weeks. The Badgers’ first loss came against Western Illinois, who lost to a lackluster Creighton team by 30 two weeks later. Wisconsin also served as the springboard for Georgetown, who has looked much stronger since defeating Wisconsin by 10. The Badgers lost to a mediocre UW-Milwaukee team last night, blowing an 11-point lead late.

It will still be a stiff jolt for the Golden Eagles, who have played poorly ranked KenPom teams since returning from the Legends Classic in late November. Even Marquette’s two most impressive wins, Arizona State and LSU, are only No. 59 and No. 89 in KenPom, respectively. Wisconsin was ranked No. 30 before the UWM loss.

Sophomore guard Sandy Cohen believes the fact that Marquette hasn’t overlooked opponents will benefit the team when it plays much stronger competition.

“We hold our team to a high standard no matter who we play,” Cohen said. “I believe that’s why we’re winning (by) so high (a margin) against these teams, because we play to our level … When we play a good team like Wisconsin, that’s going to be our habit.”

It will be an important game for the Golden Eagles because it is their last chance for a resume-building win until the BIG EAST schedule begins. Even though it does not affect the team’s postseason chances, this game is arguably Marquette’s only deeply-rooted rivalry match of the season.

“It’s a little bit more (than another game) for me,” said Cohen, who grew up two hours north of Madison in Seymour. “I’d say like 90 percent of my friends are Wisconsin fans, so this one hits close to home.”

Sophomore Bronson Koening was pegged as one of this year’s breakout players coming into the season, and he’s shown why thus far. He’s second on the team in scoring with just under 16 points a game.

Besides the obvious choices of Henry Ellenson and redshirt junior Luke Fischer, the player with the biggest impact for Marquette could be freshman point guard Traci Carter. This rivalry game will be the first career collegiate road game for Carter and his four classmates. He must be calm and cool starting the offensive possessions – a lot to ask from a player in his position. He has emerged as the team’s best distributor, dishing out a team-high 49 assists.

The big men will also need to be smart, as Ellenson and Fischer won’t be able to simply outmuscle the opposing big men as they have the past few weeks. For a rotation, Marquette will likely use only Wally Ellenson off the bench as the backup power forward. Henry Ellenson will move to center when Fischer is on the bench.

Neither team is ranked heading into the matchup, which hasn’t happened since they met in 2013. The Golden Eagles defeated the Badgers 60-50 in Milwaukee behind 17 points from Vander Blue.

Tip-off is set for 12:30 Saturday at the Kohl Center. The game, which is the Golden Eagles’ last before a nine-day break, will be on ESPN2.