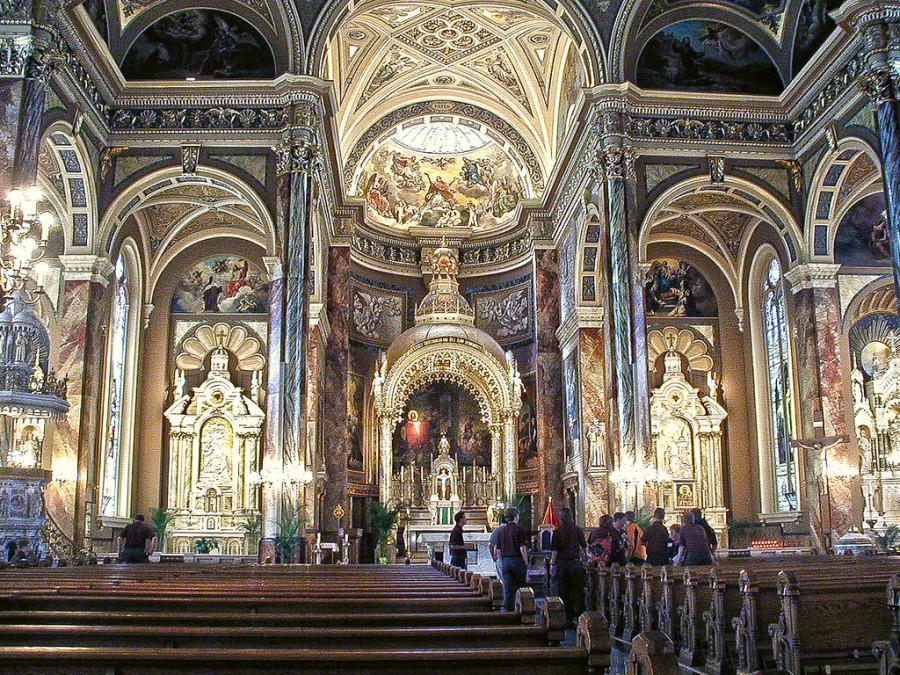 As if the rich history and stunning architecture of the Basilica of St. Josaphat did not make it special enough, this weekend it will be graced with the Bel Canto Chorus seasonal concert, Christmas in the Basilica.  Three performances of the concert will take place Dec. 12-13.

This concert continues a tradition that has lasted about a decade, and was started by Richard Hynson, the choir’s music director. Hynson credits his own childhood as the source for his desire for the chorus to sing at the basilica.

“I grew up in Washington, D.C., and I was a choir boy at the Washington National Cathedral with my father. We sang together, and during that time I experienced some of the great choral music from the earliest times (…) all the way through music that was commissioned for that choir in Washington,” Hynson said. “It was that singing of the greatest music written in that space, the beautiful Gothic space of the cathedral. The building becomes an instrument.”

The basilica, located on the south side of Milwaukee in the Lincoln Village neighborhood on 2333 S. 6th St., was designed and constructed in the late 19th century, and was modeled after St. Peter’s Basilica in Rome. Materials for the church, including beautiful stained glass windows, were brought to Milwaukee from locations around the world, ranging from Chicago to Austria. The oil murals and other ornaments that cover the interior were completed in 1929, after which the Conventual Franciscan Friars running the parish began a petition for the church to be declared a basilica.

“In the Catholic Church, basilica status is reserved for the largest, most beautiful, and most historically important churches,” according to the parish’s website. Pope Pius XI soon made St. Josaphat the third basilica in the United States.

Hynson said he appreciates the character of the sound in the basilica. He insists on having the quality found in large, stone buildings with high ceilings that have a way of enveloping the audience in sound during a performance. Like many cathedrals found in Europe, these characteristics of St. Josaphat offer the choir a beautifully dramatic yet sacred space to sing. Hynson compares driving in snow to the transition from the choir’s rehearsal space in the Milwaukee Youth Arts Center to the performance space in the basilica – perhaps a little unsteady at first each time, but easier once the skill is remembered.

“It’s always an acoustic shock because it is quite different, but we’ve done this program and sung in the basilica so often that people are ready for it,” Hynson said.

Kate Schmitt has been a first soprano in the Bel Canto Chorus for 11 years and is now the choir’s managing director. She agrees with Hynson that the venue enhances the performance. The basilica has been around for 115 years and still has its original stained glass.

“It’s gorgeous, murals everywhere,” Schmitt said. “It’s just a beautiful building and they decorate it beautifully for Christmas. It’s really got a different atmosphere than just going to the theater to see the chorus.”

The Bel Canto Chorus is a mixed-voice choir that consists of about 115 singers from a variety of backgrounds, ranging from ages 20 to 80. Singers commute from as far as the suburbs of Chicago to take part in the choir. The individuals who make up the chorus aim to make their music as beautiful and compelling as possible, often speaking to particular issues in their performances throughout the choir’s five-concert season. Christmas in the Basilica is a tradition whose focus is to spread the joy of Christmas.

“A number of families in Milwaukee use this as the jump start to their Christmas celebration,” Hynson said. “They come and sing and enjoy the music and the pageantry and the beauty of the basilica, and it somehow sets the tone then for the Christmas season.”

“After they leave our concert, they finally feel like they’re in the Christmas spirit,” Schmitt said.

The group will be performing some crowd favorites at this concert, notably Hynson’s wife Michelle’s arrangement of “Silent Night,” which the audience requests each year. Another favorite that stands out for the choir is John Rutter’s “Gloria,” a festive piece that incorporates brass, organ and percussion with vocals, a combination that Schmitt said gives a holiday feel.

“I think this is the second, maybe third time I’ve done ‘Gloria’ by John Rutter, and I absolutely love this piece,” Schmitt said. “It’s so beautiful. The chords are so rich. It’s three movements, and the middle movement, the organ does this cadence throughout the whole thing that’s so mysterious and so magical. I get goose bumps every time we perform this piece.”

The choir will also perform Hynson’s modern arrangements of classic carols and incorporate a sing-along to spark audience engagement.

“It’s a wonderful medley of old and new, fresh and traditional and powerful yet intimate,” Hynson said.

The choir has been rehearsing since early October for this performance, and is prepared to touch the audience while simultaneously continuing to grow in their professional experience.

“They always love doing the Rutter piece and it’s fun to revisit the favorites that we repeat, like ‘Silent Night,’ but I constantly challenge them to get to new heights, and the challenge this year was to memorize the pieces,” Hynson said.

Hynson said he believes many people come to Christmas in the Basilica for the pageantry of the concert, which of course is amplified by the venue and the uniqueness of the sound it helps to produce.

“People will be overwhelmed,” Hynson said.

He fully intends for this concert to be accessible and appropriate for all audiences.

“You don’t have to be Christian; the music is universal,” Hynson said. “It’s new and exciting and it’ll have something for the entire family.”