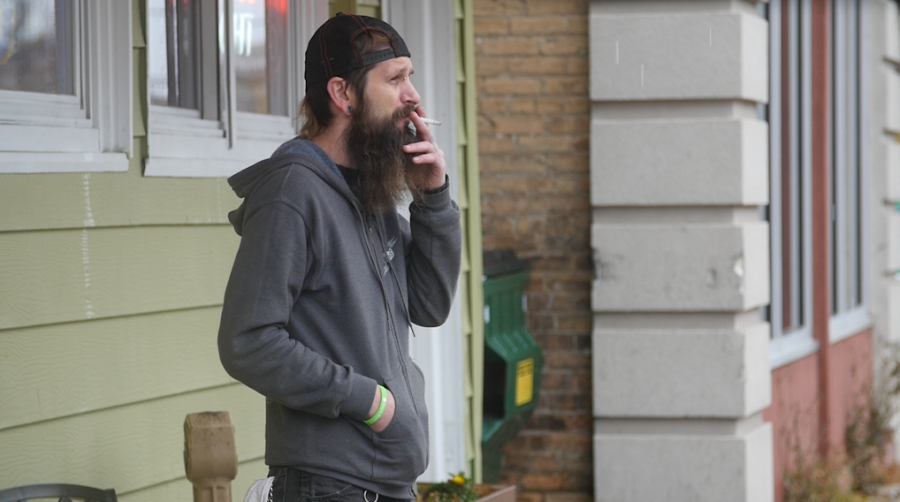 Ted Menut smokes a cigerette outside of the bar Harp and Shamrock. Menut graduated Marquette in 2002.

Ted Menut graduated from Marquette in 2002 with a broadcasting degree. Thirteen years later, Menut finds himself as a bartender at Harp and Shamrock on 20th and Wells Streets.

When Menut graduated, he had an internship and experience with student media under his belt, but it wasn’t enough. Menut said he elected not to move away from the Midwest to find a job in broadcasting when his ideal jobs in Milwaukee fell through. Menut called the experience “disheartening and frustrating.” He bounced around jobs throughout Milwaukee, and in 2005 he wound up at Harp and Shamrock, where he has worked his way up to bar manager.

“Most of the interviewers wanted me to either shave, or not have tattoos or piercings, and at that point in my life I was being a bit rebellious. So I chose personal freedom over job opportunities,” Menut said. “The end result wasn’t the cookie-cutter response to what college was supposed to be. Go to college, get a degree, get a job in the field, but that usually isn’t the case.”

Menut is not the only college graduate to wind up in a position of uncertainty after graduation.

This statistic is consistent with recent national trends. In 2014, 8.5 percent of college graduates between ages 21 and 24 were unemployed, according to the Economic Policy Institute. It was also reported that more than 16 percent of graduates were underemployed, or overqualified for their full-time occupation.

Jim Zielonka graduated from Marquette in 2011. His dream was to become a sports radio broadcaster. As a student, he worked for Marquette Radio but never acquired an internship. After he left school, he worked at a tennis club.

Four years out of college, Zielonka works as a legal assistant for Reckmeyer Law LLC in Milwaukee. He got the job after his current boss walked into the tennis club where Zielonka worked and offered the 23-year-old graduate the position.

“I guess I probably missed out on some of the opportunities that were probably there,” Zielonka said. “The whole thing is you have to put yourself out there, no one is going to hand you a job, they aren’t recruiting… You have to go put yourself out there. … My biggest regret was not spending a summer, or during a school year, interning somewhere. I know people who did and I see what they are doing now, and I know that could have made a difference.”

Thomas Sullivan is a senior the College of Business Administration. His goal is to have a career in finance lined up after he graduates in the spring. Sullivan encourages underclassmen to take classes relating to their majors as early as possible to help gain experience needed for internships down the road.

“When you are interviewing they are always going to ask you what applicable course experience you have,” Sullivan said. “If you say you got an A in creative writing, they are going to be like, ‘this is a finance internship, you are going to be using Excel all the time.’ So take classes in your major as soon as possible.”