Leathley making most of final year of college hockey 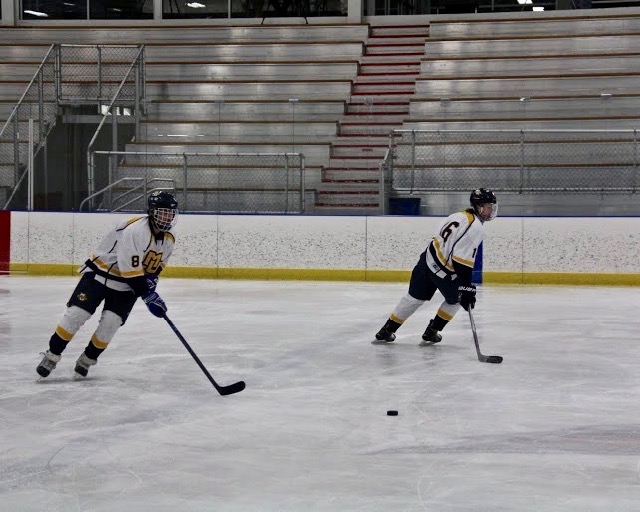 The end of a long hockey career may be in sight for graduate student Christian Leathley of the Marquette hockey team, but that doesn’t mean he’s not going to enjoy every last minute he has left.

“When I had the chance to play here, I just kind of had to take it,” Leathley said. “I really missed the game.”

The veteran center is making his presence known in his first year with the Golden Eagles, serving as one of Marquette’s top set-up men. He’s ranked third on the team with 14 assists.

Leathley is no stranger to the club hockey scene, playing as an undergraduate for Hope College. Where Leathley went, success followed. He was part of the Flying Dutchmen’s two American Collegiate Hockey Association Division III national runner-up teams during the 2010-’11 and 2013-’14 seasons.

“It was a great experience,” he said. “It was easy to make friends and get real tight with the guys on the team.”

Before arriving at Marquette in May, Leathley took a year off after graduation to decide what he wanted to do with his life. He settled on pursuing a master’s degree in nursing. His program is specifically for those with Bachelor’s degrees in a non-nursing subject.

“I wanted to get out of Michigan, and Milwaukee was a good fit,” Leathley said. “I’ve enjoyed it so far.”

Soon after arriving on campus this fall, Leathley heard word of tryouts for the club hockey team, and decided to go for it.

“I wasn’t planning on playing at all up until we started in September,” Leathley said.

He impressed head coach Will Jurgensen at the tryouts and earned a spot on the team as the oldest player and only graduate student.

“I know each time Christian is on the ice that he is playing the game as hard as he can,” Jurgensen said. “He is one of those players that you trust in any situation whether it be shorthanded, on the power play or even strength. He battles hard for each puck and is always one of the first guys in on a forecheck trying to break up the play.”

Having played for two different college hockey teams now, Leathley is used to being what he describes as “the new guy.” Luckily for him, his new teammates made his transfer process easy, and before long they were bonding. Despite the age difference, he’s already formed great team chemistry with his teammates, and even hangs out with them on the weekends.

“I try to be pretty nice to all the freshmen,” Leathley said. “As someone who’s gone through all that, I can attest to how tricky it is to be away from home for the first time. I try to have lunch with a few of them and be a role model.”

Upon graduation when he completes the track next December, he hopes to be prepared for the nursing world.

“I’m really looking forward to finally graduating and having a ‘big boy’ job and working full hours, and just experiencing what it’s really like to be in the medical profession.”

His program began last May and ends next December. This brings up the question: will he come back next year, despite graduating before the season is over? Although he might change his mind, this is likely his last season of competitive hockey.

“When I was done at Hope, I never thought I’d be playing again,” Leathley said. “Having another opportunity to play contact, competitive hockey, I’m just trying to enjoy every game, and every practice.”

As for goals on the ice, Leathley would love to return to Nationals for the first time since he was playing for Hope in 2014.

“Making the national tournament would be great time because it’s being held in Grand Rapids, which is near where I went to school,” Leathley said.

Marquette’s success this season opens up the possibility for a storybook ending of his distinguished hockey career, since the Golden Eagles compete in the same division as Hope. The Flying Dutchmen currently sit fifth in the North Region, while Marquette is second in the Pacific Region. If both teams perform well enough, a Marquette vs. Hope Nationals matchup is not out of the question.