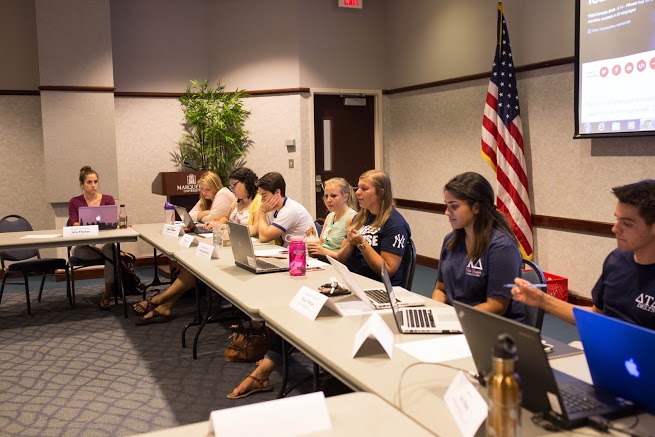 Charlotte Hingley, a junior in the College of Communication, was elected to succeed Marquette Student Government’s Programs Vice President Sarah Beattie at the last MUSG Senate meeting of the semester on Dec. 7.

Hingley will serve in the new role during the 2016-’17 school year. During that year, MUSG might restore a homecoming week for campus. As the new Programs Vice President, Hingley will play a large role in planning that week if it happens.

“For me, National Marquette Day is my favorite day on campus because our school spirit is unprecedented,” Hingley said. “Everybody loves this school, but I think we do need to dispense that into a week because it’s too much for one day.”

The idea for a homecoming week came during one of the scheduled lunches University President Michael Lovell has with students. Marquette Madness, the kick-off event for the men’s basketball season, would be one of several events included in the homecoming week, which would be put on during the fall 2016 semester.

The search committee that selected Hingley was made up of three MUSG senators, one faculty member and one student. MUSG President Zack Wallace said he and the other members were unanimous in their decision to nominate Hingley out of five applicants.

Beattie said Hingley’s curiosity before and during the interview was impressive.

“She showed to us during the interview that she had a lot of knowledge about the position even though she’s never been a part of MUSG,” Beattie said.

When Hingley transferred to Marquette from Denver’s Regis University during her sophomore year, she said her participation in MUSG programs helped make her transition better.

“I was automatically drawn to Marquette just based on the community,” she said.

Hingley said she thinks the biggest challenge of the position will be managing the program’s budget, but she plans to overcome this by planning ahead and asking for help from the MUSG finance department.

“I have a really great joy in planning something and seeing it come to life, then affecting other people in a positive manner,” Hingsley said. “That for me is really what drives my want to program.”