Women’s basketball gets first win over Wisconsin in four years 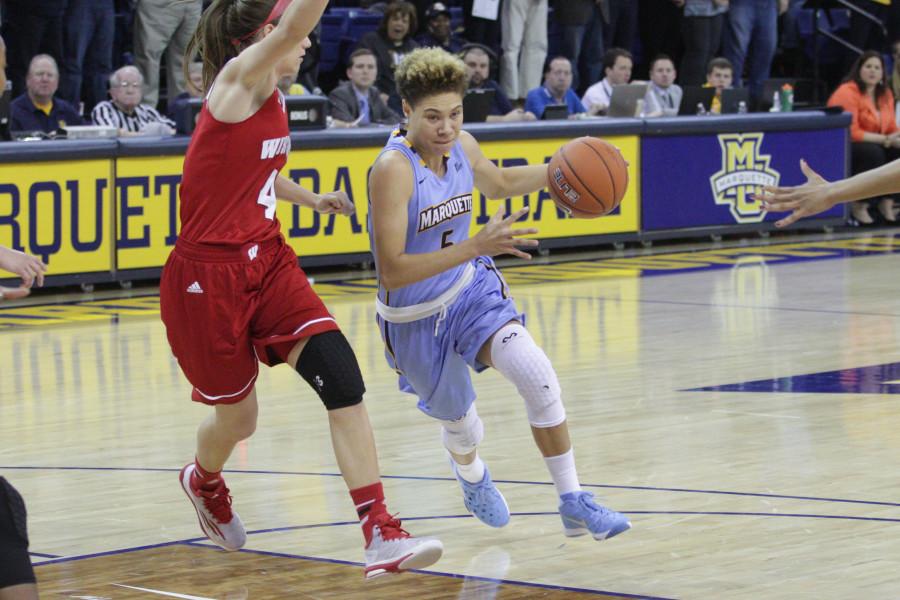 Hiedman was one of four players to reach a double-digit point total (Photo by Doug Peters/douglas.peters@mu.edu).

As both the shot clock and the game clock wound down on Marquette’s first victory over Wisconsin in four years, freshman guard Allazia Blockton cavalierly tossed up a three-pointer from about five feet beyond the arc to avoid a shot-clock violation. That shot ended up fitting perfectly into the net.

It was that kind of afternoon for the Marquette women’s basketball team, which beat the Wisconsin Badgers 77-61 on Sunday to improve to 3-5 and exact revenge for a 25-point blowout loss to their in state rivals last season.

Blockton led all Marquette scorers with 17 points on 7-14 shooting. Sixth-year forward Michala Johnson did the same for Wisconsin with eighteen points.

Sophomore center Shantelle Valentine said after the game that beating Wisconsin was personal for a lot of Marquette’s players.

“(McKayla and I) were the only ones who were at the game last year and we had a really bad loss to them, so I think the two of us came in and we knew that we wanted to beat this team for sure. We have a lot of kids from Wisconsin this year, so they know the rivalry and they wanted to beat them just as much. Everyone was really fired up coming into today’s game.”

That intensity was evident from the outset as the Golden Eagles jumped all over the Badgers to start the game. Marquette went on a 20-2 run in the first eight minutes of the game. A stifling Golden Eagle defensive effort held Wisconsin to a 1-11 start from the field.

“I’m really proud of our defense tonight, because that’s something we’ve been talking about all year,” said Marquette head coach Carolyn Kieger. “We held them to 61 points tonight, which is great.”

The Badgers would not close the deficit to any less than eight points for the rest of the game, due in large part to Marquette’s dogged effort on the boards. Kieger’s team made up for their 17-board disadvantage against Oregon State on Thursday by out-rebounding Wisconsin 50-35. Five different Marquette players hauled in more than five rebounds, with Shantelle Valentine grabbing a team-best 10 boards.

Valentine, who Kieger enthusiastically called “my Dwight Howard” as she walked up to the podium, credited the entire team for Marquette’s domination of the glass, especially the backcourt.

“We’re little, but we’re all versatile. Allazia and Danny…can get in there in the post and they can fight with anyone….It’s a really great opportunity for our team to have players who can do both and play inside out.”

Marquette also did a good job of converting those rebounds into buckets. The gold and blue scored 30 points off of 23 offensive rebounds, while Wisconsin scored only seven points off of 12 offensive boards. Forward Erika Davenport was responsible for six of those offensive rebounds and six second-chance points, both of which contributed to an overall stat line of 13 points and nine rebounds on 5-of-6 shooting for the freshman from Clarkston, Michigan.

“She’s improving,” Kieger said of Davenport. “Not just on the offensive end, but defensively as well. One of my favorite plays of the game was when she cut it back going right (for a basket). We’ve been working on her left hand and going opposite and she read the defense and made a perfect decision… When you see stuff that you’ve been working on in practice and it actually shows up, those are the moments as a coach where you have to smile.”

Wisconsin mounted a bit of a comeback late when a 6-0 run cut the Marquette lead to 70-60 with 2:36 left, but a Natisha Hiedeman layup on the next Marquette possession ended any chance of a Badger resurgence. The Blockton three-pointer put the exclamation point on Marquette’s third win in four games.

“I am getting more proud of this group by the day,” Kieger said. “They’re literally improving at such a high rate right now that if you watched our first game (as compared) to this game, it looks like a completely different team.”