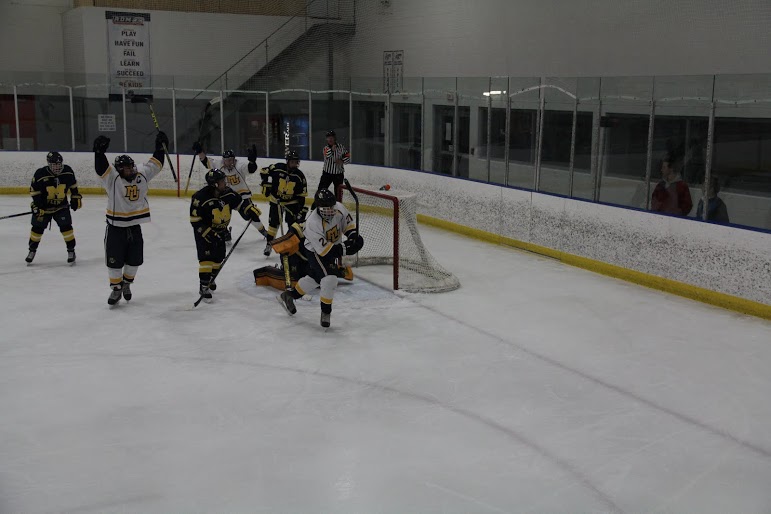 Friday’s game between Marquette and Michigan-Flint began as a tightly contested match but soon turned into a blow out.

Sophomore forward Brian Kennedy opened up the scoring just over four minutes into the game. UM-Flint would score twice before junior forward Chris Morrow found the net for the equalizer with ten minutes left to play. The game was tied at 2-2 entering the second period.

“I was just in the right place at the right time, gotta thank Benko (Adam Benkovich) and Gator (Colin Telmanik),” Morrow said. “I was just there to put it in.”

Marquette had a field day offensively in the second period as five different players scored, including Kennedy’s second goal of the day on a breakaway score with just over seven minutes left in the second.

“I didn’t think we came out like we should have but we got settled in and came out for the second,” head coach Will Jurgensen said. “The guys were a little bit more comfortable, a little bit more confident in themselves, making better passes, it was all about being able to break the puck out first.”

Emotions began flaring in the second period when a fight very nearly broke out between junior forward Colin Telmanik and UM-Flint junior forward Nicholas Kozoro. The situation only escalated from that point as a dirty hit on freshman forward David Hillen went uncalled by the officiating staff, and left the entire Marquette bench outraged.

Despite the ongoing extracurricular activities, Junior forward Corey Quinn scored what would be Marquette’s final goal of the night, and the Golden Eagles finished with a  10-4 victory.

Saturday’s game was much more closely contested, but the Golden Eagles prevailed with a 6-5 victory over the Wolverines. The win pushed the team’s home streak to 18 consecutive games dating back to last season. They’ll host one more home series against Butler in February to try to extend the streak to 20 games.

The team has extended time off due to the winter break session. Marquette next plays Jan. 22 at Bradley, which sits in 7th place in the American Collegiate Hockey Association’s Pacific Region below the 1st place Golden Eagles.