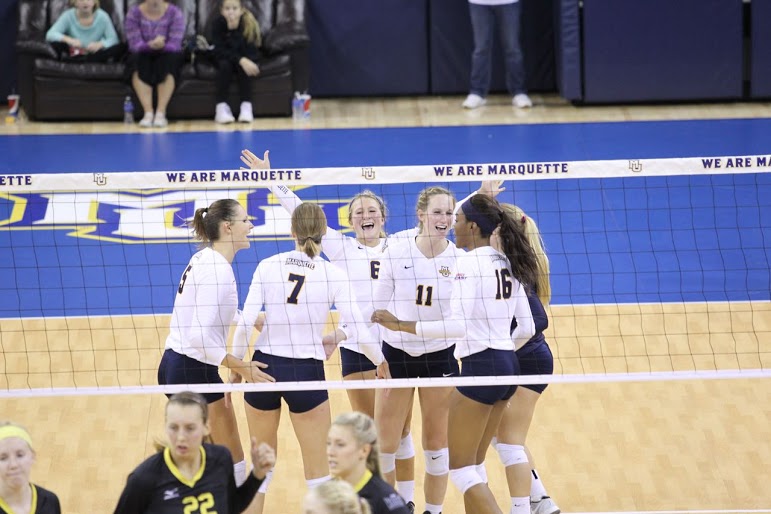 Thirty-two matches of volleyball, 116 individual sets and a full season of bruises, sweat and serves all came to a head on Sunday night in the TV room at head coach Ryan Theis’ house.

That’s where the Marquette volleyball team gathered to watch the NCAA Volleyball Selection Show on ESPNU, which all 14 members of the team hoped would tell them if they were selected to participate in their fifth consecutive NCAA Tournament. After losing to BIG EAST champion Creighton in the semifinals of the conference tournament, Marquette’s season was in the hands of the selection committee. The chances were dependent on the team’s 21-11 record and the No. 36 RPI in the country.

“Going in, we were pretty confident that we were probably going to get a bid,” junior defensive specialist Ellen Hays said. “But as we kept hearing ‘Now there’s only 32 (spots left); now there’s only 16 (and so on),’ we kept getting more and more nervous.”

In all, the volleyball team saw the first 63 bids get announced without seeing their own name. Finally, when the tournament bracket had only one open slot left in the hour-long show, Marquette’s name was called.

“They said our name, and everyone jumped out of their seats,” Hays said. “Sara (Blasier) had Riley (Burchett’s) arm covering her eyes, and when our name was called she leaped out of her chair.”

It was certainly a close one, but Marquette is safely into the tournament after barely breaking through the tournament bubble. The team will travel to Minneapolis to take on 19-14 Northern Iowa in the first-round regional match on Friday afternoon at Minnesota’s Sports Pavilion.

The Golden Eagles defeated Northern Iowa nine months ago during the spring exhibition season, winning an abbreviated three-set match by a score of 25-18, 21-15, 17-15. However, Theis cautioned against using those results as a predictor of what may happen Friday.

“Spring teams are very different,” he said. “There’s different people, there’s pieces not there, people are nursing injuries in the offseason… We’ll look at last spring’s video, and we’ll look at their current stats to see if any of those kids are still on (the court), and that will give us a little extra video on them.”

Spring results are particularly immaterial when it comes to this particular Panther team, which features three true freshmen in the starting lineup. Middle hitter Piper Thomas and libero Kendyl Sorge were both on the court for every single set of Northern Iowa’s season, while outside hitter Bri Weber saw court time in every set except for one.

True freshmen contributors aren’t the only way in which the Panthers are unique – they also have something different to offer from a tactical standpoint. Nearly half of Northern Iowa’s kills and points come from its middle hitters, and the team routinely plays three middle hitters at the same time. In a sport where outside hitters are usually the offensive breadwinners and defenses often plan accordingly, the Panthers’ lineup poses a unique challenge.

“The middle attack is coming back quicker than outsider hitter attacks,” Theis said. “It certainly does put more stress on you defensively.”

One advantage the Golden Eagles have that could nullify Northern Iowa’s middle-heavy approach is their own size up front. Nobody on the Panthers is listed taller than 6-foot-2, which will give Marquette’s 6-foot-4 middle hitter Teal Schnurr and 6-foot-6 middle hitter Jenna Rosenthal the opportunity to win jousts at the net. Even so, Theis remained leery about his team’s first round opponent.

“When we played them (in the spring) they were a competitive team that (had) good ball control and could dig the ball,” Theis said. “And that’s the same team we see now.”

If Marquette can get through Northern Iowa Friday at 4:30 p.m., they will move on to face the winner of No. 4 Minnesota vs. Jackson State.