Women’s basketball falls to 0-3 with loss to NKU 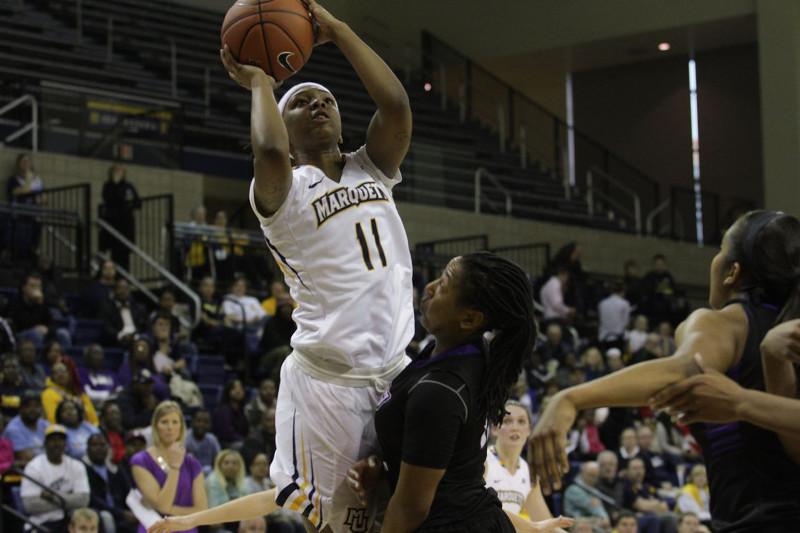 Swish. One down, one to go.

Yentz did not hesitate for a moment when the referee threw her the ball. Same three dribbles, same motion, same shot.

Clang. The ball hit the back iron, rolled around a bit, and fell off the rim.

That is how the Marquette Golden Eagles women’s basketball team fell to 0-3 against the Northern Kentucky Norse on Saturday. Marquette rallied back from 17 points down in the third quarter to briefly take the lead with under 90 seconds to go, but could not hold on to it and lost 83-78.

“We’ve got to learn how to put four quarters together,” Marquette head coach Carolyn Kieger said. “We’re playing about two and a half quarters and it needs to be four quarters.”

Marquette came out of the gate determined to try their luck from beyond the three-point line, and that is exactly what they did — every basket the Golden Eagles made in the first quarter was a three. A 5-11 start from behind the arc was good enough to earn a 16-16 tie with the Norse headed into the second period.

The hot streak wouldn’t last as Marquette made only three field goals in the entire second period. When the intermission whistle sounded, the Norse were up 34-24.

Northern Kentucky would add to their lead in the second half. Senior guard Christine Roush took advantage of shoddy defensive work by Marquette, repeatedly knifing into the lane for layups or peeling off for open threes. She scored 27 points for the game and was the primary reason why Northern Kentucky’s lead ballooned to 51-34 points with under 15 minutes left.

Fortunately for Marquette, their offense was able to get rolling again. They closed the deficit to only nine before the end of the third period, and a deep three from freshman guard Olivia Moskari brought Marquette to within five. Northern Kentucky counterattacked, repeatedly blowing by the Golden Eagles’ perimeter defense for easy layups. One such layup from junior guard Rianna Gayheart put the Norse up 12 with just over four minutes to go.

What followed in the next three minutes was perhaps Marquette’s best basketball of the season. They went on a 13-0 run that was capped off by a corner three from freshman guard Natisha Hiedeman to take a 77-76 lead. Freshman guard Allazia Blockton stepped up as well; she scored seven of those 13 points.

“That last five minutes is who we need to be,” Kieger said. “That needs to be our identity all year.”

The gold and blue could not hold the lead for long. Northern Kentucky sophomore Shar’Rae Davis drained a free throw on the Norse’s next possession to tie the game at 77, and sophomore Kelley Wiegman nailed a layup 25 seconds later to take the lead back. Yentz missed her second freebie on the ensuing Marquette possession, and Northern Kentucky was able to ice it with a few more free throws to win 83-78.

Three Marquette players scored in the double digits — Blockton with 22, Hiedeman with 17 and freshman Amani Wilborn with 14. Shantelle Valentine led the team in rebounds with 10.

Marquette women’s basketball will play their next game Monday night as they hit the road to take on South Dakota at 7 p.m.