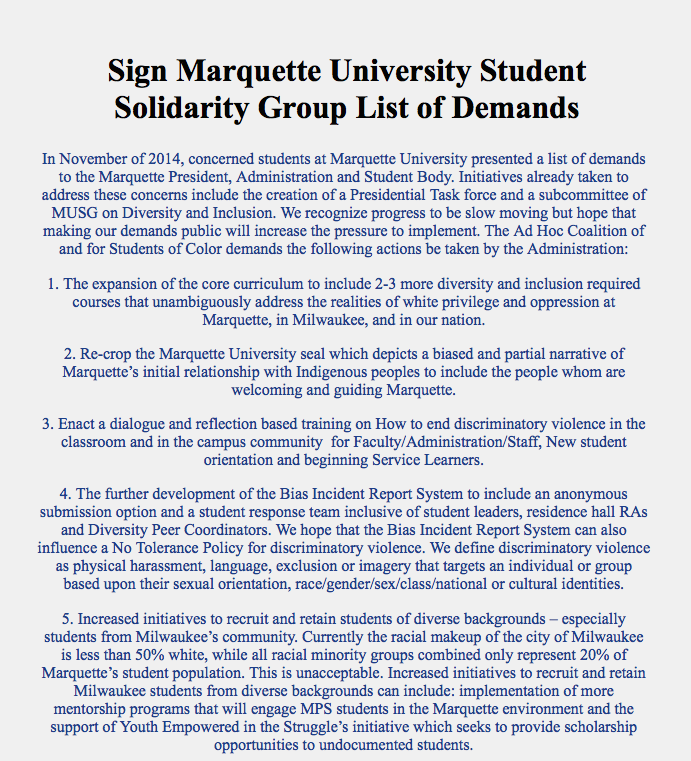 The Ad Hoc Coalition of and for Students of Color issued a set of demands to the university last April. Photo via https://docs.google.com/forms/d/1CczNK3W0812Ms3IxGPpJQO4hQ5Mh2rdwW2RZWTXmEsE/viewform

Marquette has addressed some demands from a list that the Ad Hoc Coalition of and for Students of Color issued in April.

Dora Drake, a senior in the College of Arts & Sciences and a member of the Ad Hoc Coalition, said the demands were meant to  create a more inclusive, aware and culturally sensitive campus.

“We have done a lot on diversity and inclusion issues since I have been here,” Provost Daniel Myers said about the list of demands and issues of inclusivity and cultural sensitivity on campus. Myers took office July 1.

Myers emphasized the implementation of dialogue with Marquette’s recent climate study, which was brought on campus to better understand the individual student, faculty member and staff member experience on campus.

One of the more recent climate study discussions ended with the presentation of “action steps” to the facilitators, who would present those steps to administration.

“We are in the process of looking at results and selecting action,” Myers said. “It is really important to have this kind of dialogue. We appreciate having those discussions because it is not just dialogue, it is meaningful dialogue.”

Myers also discussed the new Office of Institutional Diversity and Inclusion, created Oct. 26, the creation of the President’s Task Force on Equity and Inclusion and the recent changes to the Marquette Police Department alert systems.

The alert system changes include adjusting the notification to be designed as a warning to be careful around a specific area. It will not include race or description in the first email or text received.

“I don’t think that we have had an alert since it has been changed,” Myers said. “We don’t want people to feel like they are being targeted or looked at suspiciously because they are too similar to the suspect description.”

Upon hearing the changes, Drake said that the university has addressed one or two of the issues presented in the Ad Hoc Coalition’s list of demands, but generally speaking, the list of demands has not been addressed.

Drake used the example of the demand to re-crop the Marquette seal to depict what happened historically.

“Instead, the result was creating a plaque that explained the history behind the seal,” Drake said. “That demand wasn’t met, it was amended to make it more passive.”

Joseph Martinez, recent graduate of Marquette and co-founder of the coalition, agreed the university has not met the list of demands.

“Dialogue is a good first step, but it is simply a first step,” Martinez said about the recent climate study discussions.

Martinez explained that while dialogue is a good first step, concrete action needs to be taken on campus.

Drake and Martinez both said that they understand that change takes time.

“Marquette needs to make this a priority because people are aware of what is happening and they are not going to stop talking about it,” Drake said.