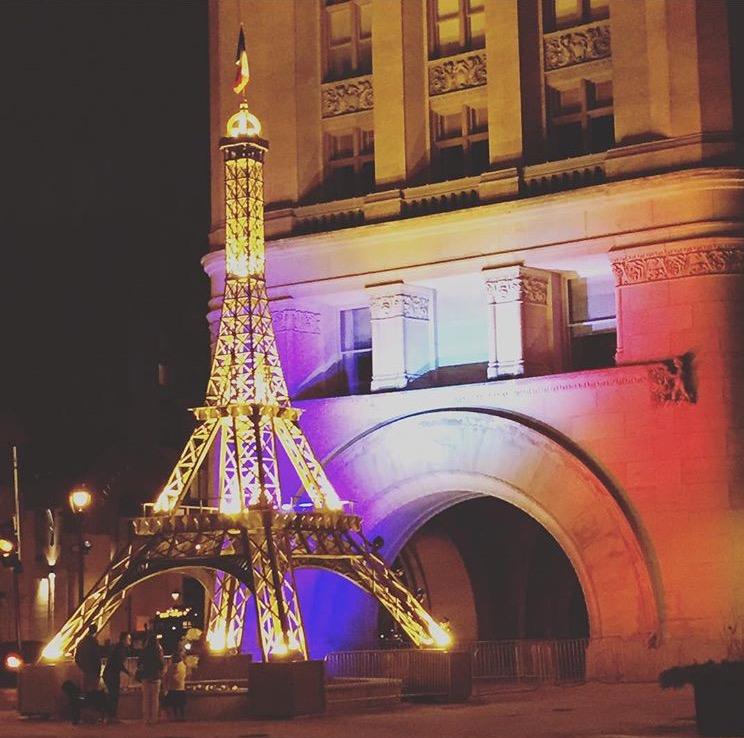 Milwaukee erected a miniature Eiffel Tower at City Hall to show solidarity after the attacks. Photo courtesy of Rebecca Rebholz

Carina Belmontes, a junior in the College of Business Administration who is studying abroad in Paris, said the city is tense after being rocked by Islamic State terrorist attacks on Nov. 13.

“We are all trying our best to get back into our normal routines, but it’s difficult,” Belmontes said in an email. “Every little thing makes everyone jump.”

Seven Marquette students were studying abroad in Paris during the attacks and all of them are safe, the university reported Nov. 13 on Twitter. The string of six coordinated attacks on different locations throughout the city ended up wounded 352 and killed at least 129, according to a CNN report.

“I think what I most felt was shock and nausea,” Belmontes said. “I remember sitting in bed, shaking, crying and feeling like I wanted to throw up.”

The College of Business Administration’s study abroad director sent a check-in email to Belmontes and the other students abroad less than an hour after the attacks started.

In addition, the study abroad director at the Paris School of Business, where Belmontes is studying, emailed all of the school’s international students and continued to follow up until everyone confirmed their safety.

Marquette graduate Sophie Zeck, a teacher in Paris, was on the Metro the night of the attacks when a woman stopped her and asked if she spoke English.

“She told us there had been some shootings in the 10th arrondissement and that we should get home soon,” Zeck said in an email. “Fortunately, we were able to get there before the authorities closed the Metro.”

Zeck was supposed to be at the soccer game at Stade de France, the site of one of the bombings, but her plans changed.

“We had someone looking out for us that day,” she said.

It was the same situation for Sarah Cortez, a junior in the College of Arts & Sciences, who originally planned to go out near the site of the attacks that night. She had to leave later than usual so she could register for next semester’s classes at her assigned time – 10:30 p.m.

“At 10:27 p.m., my roommate from Texas came running to the dining room saying ‘there’s just been a shooting at this cafe!’ and all of us thought it was most likely a crazy person,” Cortez said in an email.

Once she realized what was going on, Cortez and her friend started to pray the Rosary. She was later emailed a list of precautions to take from then on out.

“We were so scared and worried for the people held hostage, for the numbers that kept rising on our computer screen, for all our classmates, our teachers,” Cortez said. “Because our laptop screens kept telling us so much information about bad things happening, we felt like it was never ending.”

The weekend passed by before Belmontes was ready to go outside and face what happened.

“I went out to see the Eiffel Tower shining with the colors of the French flag,” Belmontes said. “While it was a beautiful sight, it was also heart-wrenching to know the reason why the colors were different.”

After wanting to live in Paris since she was eight, Zeck said she won’t let the attacks take away from her accomplishment.

“I’m finally here and I can’t let something like this stop me from fully pursuing my dream,” she said. “It has kind of given me a wake-up call in certain aspects of my life and how I plan to deal in the future.”

Cortez said she considered leaving the country but thought otherwise.

“My Parisian classmates cannot do that,” she said. “This is their home, and if they are going through this hard and frightening time, then I should at least help them get through this. That is the least I could do.”

Belmontes woke up the day after the attacks and found comfort in the solidarity shown by the Facebook French flag profile picture filter and major landmarks lit up in the French flag’s colors.

“I am actually incredibly touched that of all places, Milwaukee, my hometown, not only lit up the (General Mitchell) airport MKE sign … but also pulled out the (Milwaukee School of Engineering) Eiffel Tower it uses during Bastille Days,” Belmontes said. “I’m just so touched by the love and concern everyone is showing.”

As Paris is recuperating, Belmontes feels as if she’s starting over and getting used to the city again.

“I guess one thing that really changed for me is that before, I used to be afraid of being pick-pocketing,” she said. “Now, I’m afraid of another terrorist attack.”

Zeck said she’s staying focused on what she came to Paris to do: live and teach.

“Parisians are resilient and often stubborn so we’re trying to show the world that we are not afraid, even if we are,” she said.