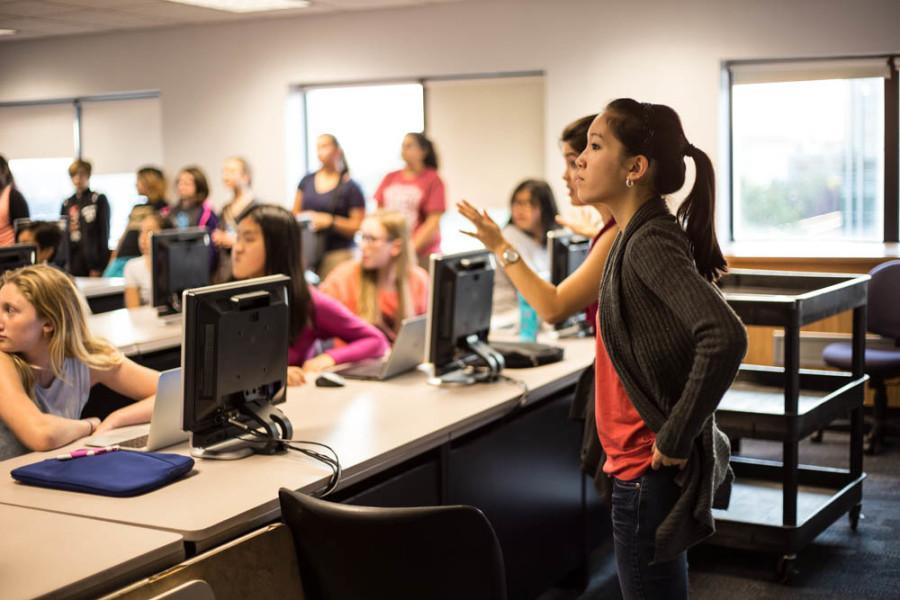 Girls Who Code, an organization that hosts middle and high school girls every week on Marquette’s campus, held an ultrasound day on Tuesday night in Haggerty Hall.

Girls Who Code is a national organization that aims to educate girls about the science, technology, engineering and mathematics fields by teaching them the fundamentals of coding.

Sally Lin, a graduate student and the coordinator for Girls Who Code, said the national organization encourages their branches to bring in speakers from a variety of STEM fields. This way, the girls can see practical applications of what they are learning in class.

“The goal is to expose them to different career tracks that they can do in addition to teaching them,” Lin said.

Lin has lined up a number of speakers to visit in the next few months. Among the visitors will be representatives from Rockwell Automation and Google.

Tuesday’s guest speaker, Yelena Tsymbalenko, is a software architect for General Electric Healthcare. She is a mother of one of the girls and was invited by Lin to educate the group about what ultrasound technology can do and how it works.

“I think my major goal is just to show how cool ultrasound technology is and to raise awareness of what it can do and also to inspire,” Tsymbalenko said. “I want to show the girls that what they’re learning now can be useful.”

Tsymbalenko taught the girls about different uses for ultrasound technology, from seeing babies in the womb to diagnosing health concerns. With the girls, she demonstrated ultrasound machines on a phantom baby and a bucket with a fish in it.

Isabelle Kramar, a 7th grader at Lakeshore Middle School, is Tsymbalenko’s daughter and a member of Girls Who Code.

“I really think that (the presentation) is inspirational based off of previous knowledge of what she does for a living,” Kramar said. “She programs machines using what we’re learning, pretty much. It’s cool that she’s a woman in engineering who came into Girls Who Code.”

Tsymbalenko wants to encourage the girls to be problem solvers. She hopes to see more women in STEM fields.

During her presentation, Tsymbalenko showed a picture of herself seated at a table with mostly male colleagues.

“You can see the gender gap,” she said to the girls. “Not many women in engineering. But you can change that.”