EDITORIAL: Advocating on social media, events must be upheld as events, not trends 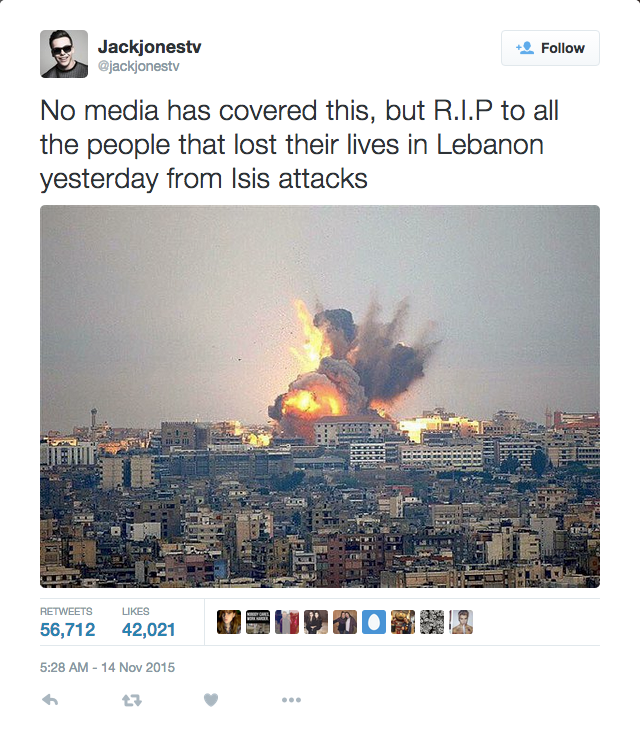 Social media brings out the temporary activist in everyone. In this day and age, it is possible to be informed about international events within 30 minutes of when they occur. In a matter of hours, local events can become national – even international – affairs. But near-immediate access to information on current events illuminates something else: a need to participate in the event, even when several degrees removed. Students of Marquette, if you are going to advocate and opine on current events, uphold them as events rather than social media trends.

Following the Paris attacks on Nov. 13, @Jackjonestv tweeted “No media has covered this, but R.I.P to all the people that lost their lives in Lebanon yesterday from Isis attacks,” with an outdated photo of a bombing that occurred in Lebanon in 2006. This tweet is one of many that had thousands of retweets by people who were outraged that the media had not been covering the bombings. The media did, in fact, cover these acts of terrorism, it just wasn’t trending at the same caliber as the attacks in Paris.

It is easy to skim through Facebook and assorted news-site headlines, but be sure to do your research. If you post or share an article you have not read, you may be astonished to find the event occurred months, or even years ago.

Just like your academics, check your sources. If you are using Twitter, are the accounts you are following credible? For every credible account, fact or article, there are many that are not.

Upon initially hearing an argument or opinion, you may agree, but you should dig deeper and explore below the surface-level. Change is one of the only constants in life, and your opinions are not exempt from this. You may end up disagreeing with your initial post, and while you can delete it, those who cared enough to read what you shared will inevitably remember the contradiction.

Just as opinions change, so do the current events that people talk about. People are willing to share their thoughts for a few days, but if they don’t get enough likes or retweets, they move on and wait for the next big thing. Because of this, activism on social media is ephemeral at best.

If you are going to write something, make sure you know why you are writing it. If you are sharing your viewpoint because your friends are doing so and you feel obligated, that may not be the best decision. Maybe the current event was about college students protesting and you feel it is your duty to share whatever stance you take as an act of solidarity. Just because you don’t share an article or 140 characters of your sentiment, that doesn’t mean you are not knowledgable of the situation, nor does it mean you are a bad person.

If you are sharing your thoughts for validation and praise from the rest of the world for participating in a controversial issue, you may want to reconsider, especially when several degrees removed from said issue. Some people want to share their opinion because they want to be the first to say something, but you never know who this may affect. Immediately after the Paris attacks, analysts deduced how the attacks would be good for Republicans or how they would be good for Democrats, yet the number of lives lost had yet to be known, and people had just started mourning.

There is something to be said about leaving space for those immediately affected to grieve or be angry. Everyone deserves the space and time to process pain, and the rest of the world needs to learn to process events while removed from the immediate situation – this doesn’t come easily to anyone. It’s hard to imagine creating time – even space – for solitude in today’s world.

The way you react and advocate on social media is accessible to almost anyone in the world. If you feel obligated to share your sentiments, keep in mind that these are real events, not just trends, that have affected real people. If you do share, be smart about it and make sure you have your facts straight. Dig deep into issues and read the opinions of others on both sides of the argument. Social media activism comes and goes. With each current event, those directly affected aren’t going to remember the opinions that were shared, but they will remember how they felt and how difficult the experience was. So please, respect those who are processing and grieving before giving your own two cents, or don’t share anything at all.