Forward Lee Barnes is third on the team in points and assists. 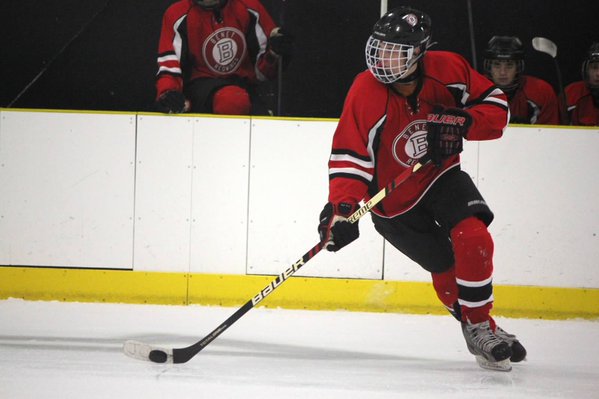 For Marquette hockey freshman forward Lee Barnes, hockey has always been a family affair. He first began playing the game at the age of three, when he began attending his cousins’ games. From that moment on, a friendly rivalry was born.

Growing up in Naperville, Illinois, Barnes was rarely lonely. He is the second oldest child with six sisters and is not short on cousins either. Barnes has 32 cousins and grew up both competing and socializing with them.

“I’m always trying to do things they can do to keep up with them, and we all kind of learn from each other on and off the ice, Barnes said. “We’re all buddies off the ice too, so that’s a lot of fun.”

The closeness with his cousins continued throughout high school. After spending his first two years of high school on a club hockey team, the Naperville Sabres, he decided to take his talents to his high school’s team. During his two-year career at Benet Academy, Barnes played with three of his cousins, including two on the same offensive line as him.

Even now, though, Barnes has kept his family ties close as he’s roommates with one of his cousins at Marquette.

By electing to attend Marquette, Barnes became the second athlete from his family to represent the school. His oldest sister is redshirt sophomore Nicki Barnes, a defensive specialist on the volleyball team.

“My older sister goes here, so I knew I was going to come here,” Barnes said. “Then I found out that they had a club team so I figured I might as well try out.”

Barnes tried out for the team because he wanted to meet new friends. He also thought it would be a good method of staying in shape while allowing him to continue his career in the sport he loves.

Barnes has found more than new friends–he’s found a role as a major offensive weapon on the team. Through 16 games, Barnes is third on the team in both points (17) and assists (10). He’s also displayed his goal scoring ability, tallying seven goals so far this season, which ties him for fifth best on the team.

“He’s a great hockey player,” head coach Will Jurgensen said. “He’s got some of the best hands on the team. He’s probably had the most pretty goals this season.”

“I’m getting fed a lot of good passes, and they’re finishing off plays that I give to them,” Barnes said. “It’s just been fun playing with them.”

Despite his recent success, Barnes has had to adjust to the pace and physicality of college hockey and has had low moments, one of which was a turning point for his confidence this season. Jurgensen selected Barnes to skate first in the shootout against Robert Morris-White in September. With all the pressure, he missed and Marquette went on to lose the game.

“I was pretty disappointed in myself,” Barnes said.

Since then, he’s improved his game as an offensive leader. He proved how far he’s come during this past weekend’s shootout against Missouri State. Barnes was once again selected for the shootout. This time, the result was far different. He scored, and Marquette went on to win the game.

Barnes has gained steam and his coach has taken notice.

“Lee’s definitely become more confident in recent weeks,” Jurgensen said. “I think any freshman who comes takes a little while to get adjusted to the kind of speed and physicality. It’s a big step up from these kids playing high school hockey.”

What started out as a source of new friends and exercise has transformed into a starring role on the region’s number one club hockey team.