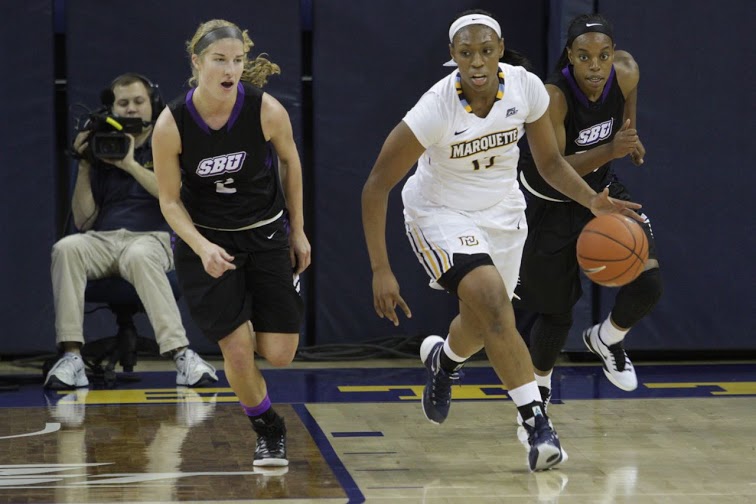 The Marquette women’s basketball team, though young, had spurts where they looked like seasoned veterans Monday afternoon against the IUPUI Jaguars.

Those spurts weren’t quite enough, as the Golden Eagles fell to the Jags 60-55.

Marquette could not have gotten off to a much faster start, jumping all over IUPUI to get out to a 13-1 lead with just over five minutes left in the first quarter. It took until more than halfway through the quarter for IUPUI to even make their first field goal; before that, they missed their first 10 shots. At the end of the first, Marquette was throttling IUPUI, 22-11.

However, IUPUI took advantage of Marquette’s penchant for committing fouls to climb their way back into the game. The Jaguars drew 31 fouls over the course of the game, leading to 37 shots from the free throw line and four Marquette players fouling out by game’s end. Losing upperclassmen McKayla Yentz and Shantelle Valentine, as well as freshman guards Danielle King and Natisha Hiedeman thinned Marquette’s roster to six players and allowed IUPUI to gain an edge.

“When you have five freshmen on the court for the majority of the game, there’s going to be a lot of teaching points,” Kieger said.

IUPUI looked to be firmly in control in the fourth quarter with a 54-47 lead and only 40 seconds left. However, three-pointers from freshman guards Hiedeman and Allazia Blockton cut the Jaguar lead to 56-55 with 12 seconds remaining. IUPUI’s Martha Burse sank two free throws off the ensuing inbound to make the comeback unlikely. Freshman Amani Wilborn’s last-gasp three-pointer couldn’t find its way into the basket.

Hiedeman led all Marquette scorers with 21 points and seven made field goals. Blockton was the only other Golden Eagle to join her in double-digit scoring; she had 15 points. Marquette shot just 30 percent from the field (20-67) despite collecting a mammoth 48 rebounds.

The 0-2 Golden Eagles are back in action Saturday, when they will leave Wisconsin for the first time this season to battle Northern Kentucky.