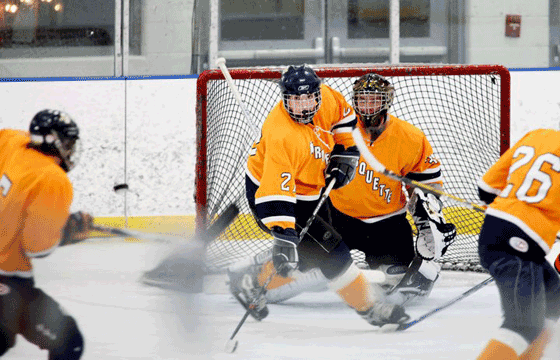 The Marquette hockey team pushed its win streak to seven games with two wins against Missouri State. The Golden Eagles have also now won 16-straight at home dating back to last year.

Continuing a trend that’s been a problem all season, Marquette conceded the first goal of the game to their opponent, and trailed Missouri State 1-0 at the end of the first period. A strong second period featuring three unanswered Marquette goals gave the Golden Eagles a 5-3 lead after two. Missouri State would score twice in the third period to force overtime.

“We were undisciplined, we took a lot of penalties, and that resulted in some goals for them, and they were able to come back because of it,” said head coach Will Jurgensen.

After a closely contested overtime period, the game was decided on a shootout. Barnes skated first for the Golden Eagles and scored. A miss by the Bears gave Marquette an early 1-0 advantage. Junior forward Chris Dolan missed his attempt, but sophomore goal keeper Robby Arner denied Missouri State’s next attempt. On the ensuing shot, junior forward Corey Quinn scored to win the game.

It was a tale of two completely different games once again for Marquette, as the Golden Eagles won Saturday’s game in commanding fashion. The team scored six goals before Missouri State tallied their lone score for the game. Junior forward Colin Telmanik recorded a hat trick by the third period, and the Golden Eagles won easily, 10-1.

“I want to perform at that 10-1 hockey team a little more than squeeking by and getting some W’s,” Jurgensen said.

With the win, Marquette moves to 12-3-1 on the season. The Golden Eagles travel to Iowa this upcoming weekend for the clash in the corn tournament where they’ll play three games in three days.