Marquette community stages silent demonstration for the University of Missouri, people of color 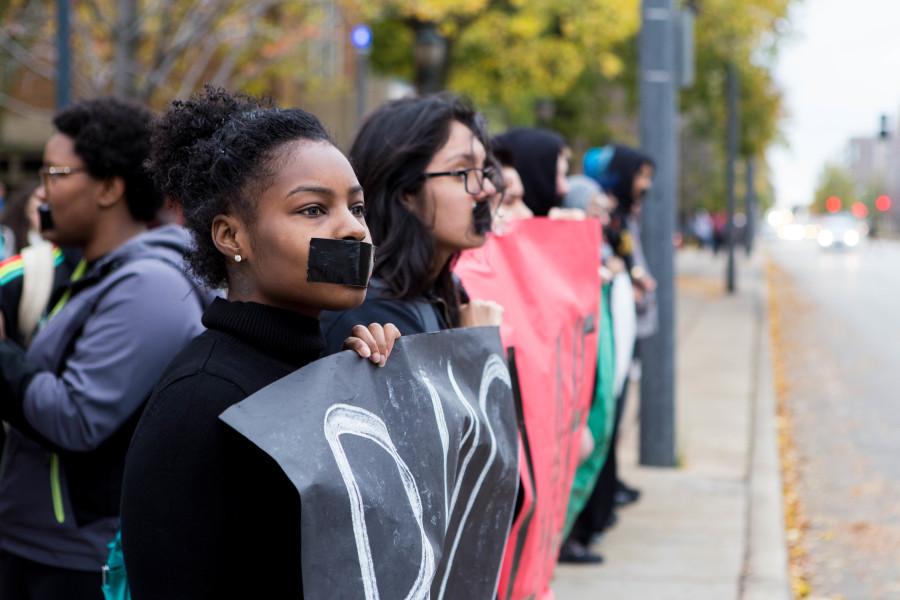 Dora Drake, a senior in the College of Arts & Sciences, said when she came to Marquette the only thing she was concerned about was having a chance to succeed.

Soon after, she said she realized her race and gender would influence that success.

“This is an issue here,” Drake said about race. “Many people are afraid to talk about it because it makes them uncomfortable, and, at the same time, when people do talk about it, it is only discussed by students of color.”

Days after Tim Wolfe resigned as president of the University of Missouri due to his mishandling of racial tension among students, schools across the country are demonstrating to show support for the school. In addition, Missouri State activist Ravyn Brooks put out a call of action for “black students and allies to demonstrate in light of systemic racism in public and private academic institutions.”

Marquette responded to that call with a silent protest of nearly 100 people linked arm-in-arm along Wisconsin Ave. on Nov. 12. They said they were standing in solidarity for students of Missouri, Marquette and students of color across the country.

“It is disheartening knowing there are people like me, trying to get educated, that can’t go to class without having to look behind their back,” said demonstration participant Brenda Brambila, a junior in the College of Arts & Sciences. “We have been shouting a lot about Black Lives Matter. Let’s see what silence does.”

Those that gathered were of various races and included faculty, staff, students and Milwaukee community members. University President Michael Lovell, Provost Daniel Myers and the mother of Dontre Hamilton, an unarmed black man who was killed by a white Milwaukee Police Officer, were also in attendance.

Lovell said he went to show support for the students and community. Myers added it was a proud moment to be a part of Marquette.

“It is well-timed since we are in the middle of Marquette’s campus climate study,” Myers said. “We are making big steps. These are awareness-raising moments.”

Students and faculty held signs saying “#concernedstudent1950,” referring to the group of University of Missouri students protesting against their administration, and “#MUisMizzou.” Nearly one-quarter of the protesters, including Brambila, wore black tape over their mouths.

“The tape you have on your mouth is symbolic of what students of color feel all the time,” said Marina Murphy, a senior in the College of Communication, in a speech to the crowd when the protest ended. “We do not feel listened to. We do not feel valued.”

Both Murphy and Drake helped organize the protest. Murphy said it was put together quickly after they received the call to action. The National Association for the Advancement of Colored People, Black Student Council, Youth Empowered in the Struggle, and Coalition of and for Students of Color at Marquette are all organizations that took part.

“We did not expect this many people to show up,” Murphy said.

Drake agreed and said it was the first time she felt the faculty and staff offer their support in this way.

“It is disappointing it took so long to get this many people together like this,” Murphy said. “But with the protest there is more support than ever.”

Another similar demonstration will be held Nov. 12 at 6:30 p.m. in Alumni Memorial Union room 448.