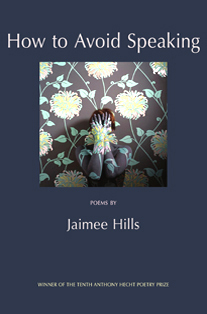 Marquette adjunct professor Jaimee Hills has had many different job titles in her lifetime. She can now add award-winning poet to the list.

Hills’ debut collection of poems, “How to Avoid Speaking,” won the tenth annual Anthony Hecht Prize this fall. In addition to a $3,000 reward, she was also given the opportunity to read alongside famed British poet Anthony Thwaite at the Folger Shakespeare Library in Washington D.C.

“It was a great honor to read alongside Anthony Thwaite,” Hills said. “He is 85 years old and is this energetic force. He gave me tips on how to read my poems during our mic checks to ‘lift the words’ and to read very slowly so even though we’d never met, I felt like this person was an immediate mentor.”

Hills finds inspiration in many things. In her undergraduate days she studied art and science alongside her writing-intensive courses. Much of her poetry deals with language and is sometimes based on odd phrases.

“I am inspired by language and interesting phrases,” she said. “I think a writer develops a relationship to language as an important way of seeing the world.”

The subject matter of her work ranges from the absurd to the serious. Her poem “Derrida Eats a Dorito” imagines exactly what would happen if post-modernist philosopher Jacques Derrida agonized over whether or not eat a dorito.

Another of Hills’ poems “True Knot” was inspired by the birth of her daughter. A true knot is a dangerous condition involving the umbilical cord. Hills said she was “struck by the simplicity of the phrase that didn’t seem to match the emergency of the situation.”

An entire section of “How to Avoid Speaking” revolves around the concept of removing a single letter from words in a poem and changing its meaning. Her poem “Lesson on the Letter S” juxtaposes the words laughter and slaughter as well as swords and words.

She recently shared her poetry, along with former Milwaukee poet laureate Jim Chapson and Tyler Farrell, visiting assistant professor of English, at a reading in Sensenbrenner Hall.

“Prof. Hills’ collection of poems is quite striking, a feast of images and ideas,” said Farrell, who recently published his second collection of poems “The Land of Give and Take.” “Hopefully Marquette can continue to highlight faculty accomplishments.”

Hills described winning as a dream come true. She said often the difference between writing as a hobby and as a profession is getting published. Winning the Hecht prize gave her a sense of validation as a writer.

“I think any writer continually asks the question: is this any good? Getting a poem accepted for publication is usually confirmation that the work you do has value, but winning the award was like a sea change, as though I’d been knocking on a door for years, and suddenly that door opened.”

Although she does not know what the future holds, Hills hopes to continue to publish poetry.

“That is the hope and the dream,” Hills said. “It takes me a long time to feel like a poem is really finished, so a new collection of many poems will probably take years.”